The Old Colony Mennonite Church of Manitoba was officially organized and founded in 1936 with people who had not immigrated to Mexico with the leaders of the Reinländer Mennonite Church.

Old Colony Mennonites immigrated into Canada from Russia in 1875. In 1922 the majority of the church membership of this group, then in Manitoba and Saskatchewan, immigrated into Mexico, including most of the clergy. In 1927 the Reinläender Mennonite Church which had been founded in 1875, officially ceased to exist in Canada. Occasional services were still held by those ministers who had not moved to Mexico, and by ministers from Sommerfelder churches. Later, two ministers who remained in Canada arranged a meeting with the members. They were John Loeppky and Abram Wall, both from the Osler, Saskatchewan area. At this meeting, several of the Manitoba leaders also took part. The meeting was held on 20 March 1930 with Bishop Cornelius Hamm of the Bergthaler Church officiating. Johann Loeppky was elected and ordained as Bishop, and the reorganized church took on the name: "The Old Colony Mennonite Church." After this 1930 meeting Bishop Loeppky came to Manitoba once or twice a year to serve with baptism and communion.

In 1936 the members in Manitoba reorganized to form the Old Colony Mennonite Church of Manitoba. The first clergy election was held 25 June 1936. Jacob Rempel, Jakob Froese, and Peter Harms were elected as ministers. A second election was held on 10 November 1936, where Abram Janzen, Peter Zacharias, and Jakob F. Penner were also elected as ministers. Additional ministes were elected in subsequent years. 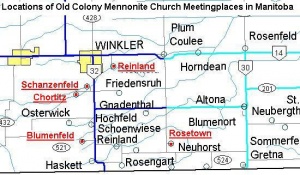 The leadership structure of the Old Colony Mennonite Church consists a ministerial body which presents the sermons and is also the governing body that sets policy direction for the membership. The ministerial body consists of the bishop, who is the head of the church, the ministers, and the deacon. The ministers and deacons are elected from the men of the church, and the bishop is elected from the ministerial. The term of office is for as long as the person is capable, and he remains true and faithful to God's word and the Church. There is no salary paid to any ministerial member.

When preaching, the ministers wear black suits and long coats. There are no musical instruments in the Old Colony Mennonite Churches. Singing is usually led by three or more song leaders who lead out in singing. In 2004 the churches used German and some English. The men and women sit on separate sides during the church service. Financial needs are met through voluntary giving when the collectors drive around once a year and personally visit the membership. Special collections are also held for various projects as needed.

Sunday schools have been operated by the Old Colony Mennonites in Manitoba since the 1940s. Classes are held during the regular worship services. The youth also meet on Wednesday evenings. Many Old Colony children attend public schools, while others are home schooled using Christian Light Education curriculum published in Harrisonburg, Virginia. Some also attend private schools operated by committees consisting of Old Colony, Reinländer, and Sommerfelder people. In 2000 the three private schools were the Valley Mennonite Academy in Chortitz, Grace Valley Academy in Gnadenfeld, and Prairie Mennonite Academy south of Plum Coulee.

In 2003 the Old Colony Mennonite Church of Manitoba divided. The larger, more conservative of the two groups that resulted from the division adopted the name German Old Colony Mennonite Church (Deutsche Alt-Kolonie Mennonitengemeinde), while the smaller group retained the original name. The smaller group of around 500 members in three congregations adopted some practices, such as using English in church services, that the larger more conservative group would not accept.