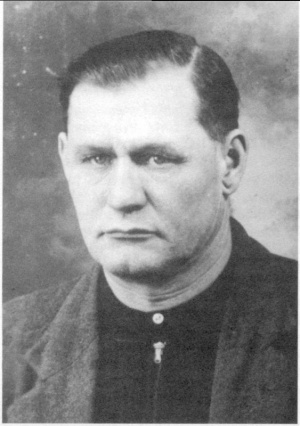 Jacob Frank Penner: farmer, school trustee and bishop of the Old Colony Mennonite Church (Manitoba); born 22 September 1898 to Franz and Maria (Thiessen) Penner in the village of Chortitz, three and one-half miles southwest of Winkler, Manitoba, as the second of three children. His mother died when he was two, but his father soon remarried, providing him with a caring and nurturing mother in the person of Helena Suderman. Jacob grew up as a very capable student, learning the basic arithmetic, reading and verses of the church catechism in the private village school at Chortitz. At age 16, he approached  a teacher from the English school system in Winkler, to come  to his village  during the winter evenings and teach English to the boys, which would  assist them in conducting business in the surrounding area. This adventurous and independent spirit continued with him throughout his life.

Jacob was baptized in the Reinlaender (Old Colony) Church at Chortitz on 9 June 1919.  On 12 December 1920 he married Sara Penner (1901-1993), the daughter of Heinrich and Sara (Dueck) Penner, and he started his own family which eventually consisted of 12 children. In 1922, the villagers of Rosenort (now Rosetown, Manitoba) approached him to take the role of village schoolmaster, a role he combined with farming. Jacob and his family moved to Mexico in 1925 with many other Old Colony Mennonite families who were alarmed about the govenment's compulsory public school system. However, he returned to Canada again in 1929 due to concerns about health and safety in Mexico.  Starting to farm again in Manitoba was very difficult for Jacob and his family in the early 1930s, especially since they had been swindled out of most most of their savings during the move back from Mexico.

In 1936 he was called as a lay minister in the newly re-organized Old Colony Church in Manitoba. Jacob began his ministerial work with Bishop Jacob Froese of Reinfeld, serving in Chortitz, Reinfeld, Blumenfeld, and Blumenort. He traveled extensively within Manitoba and to other provinces, and he even went on speaking trips to Bolivia. Jacob was concerned about the spiritual health of young people, and he actively pursued Bible study sessions for his children and Sunday School for the groups he served. During this time he also served a two-year term as a trustee for the Glencross School District.

Jacob F. Penner purchased a farm near Morden, Manitoba in 1939.  Here he became a school trustee of the Mountain City School in 1950 and chairman of its board in 1952, a position he retained until the school closed in 1966. One of his innovations was to introduce High German into the curriculum, making the school bilingual.

Jacob F. Penner became bishop of the Old Colony Mennonte Church of Manitoba in 1959. He frequently spoke at two seniors’ residences -- Salem Home in Winkler and Tabor Home in Morden. When a new church was built in Chortitz in 1967, Jacob became involved in helping establish Bible studies and other ministries there. Even as he experienced personal health problems, he continued to actively serve his people till he died of a massive cerebral haemorrhage on 18 November 1974 in Winkler, Manitoba. He is buried in the village cemetery at Chortitz.