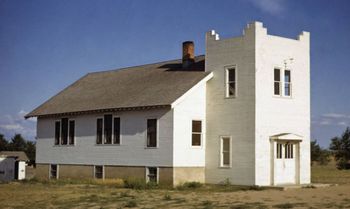 Eventually there were fewer families living near Paxton and more farming around the Madrid area. In October and November of 1963 the parsonage was moved to Grant, Nebraska, after it was decided to build a new and larger church that was more centrally located. Plans for the new church were approved and work began in March 1964. In the summer of 1964, the congregation moved to Grant where John A. Schellenberg was the first pastor in the new building and it became known as the Grant Mennonite Brethren Church. The first service was held on 14 June 1964 with the dedication service on 2 August 1964. The old church building near Paxton was sold and moved to Roscoe, Nebraska where it was used as a school house in District Seven.

A new addition of Sunday School rooms was completed about 1977. In 1990 a new sanctuary, social hall and kitchen were built. The first wedding in the new church was on 18 August 1990 with the sanctuary completed but the kitchen was not yet completed. The first Sunday service was the next day on 19 August 1990.

In 1993 the name of the church was changed to New Life Fellowship Church.

US Conference of Mennonite Brethren Churches