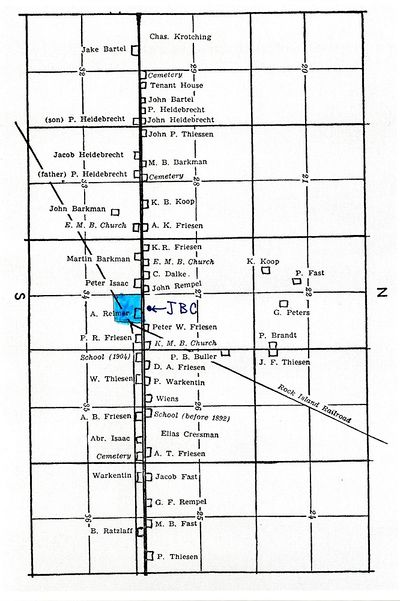 Jansen drawn as a "Line Village," ca. 1890. Note, North is to the right.The numbers, 20 to 36, identify the section numbers in the township; the blue square, location of the current village of Jansen, and "JBC" marks the location of the Jansen Bible Church.
Source: Reimer, G. E. and G. R. Gaeddert. Exiled by the Czar: Cornelius Jansen and the Great Mennonite Migration, 1874. (Newton, 1956): 205. 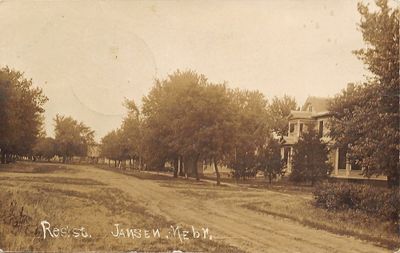 Mennonites immigrated from the Russian Empire to Jefferson County, Nebraska beginning in 1874-1875 and purchased about 25,000 acres, (about 40 sections or ~10,000 ha.) of land from the Burlington and Missouri Railway company at an average price of three dollars and seventy cents per acre (per 0.405 ha.). In keeping with the traditional form of settlements in Russia they organized in Nebraska well-planned small hamlets with in this larger acquired area. This was in the Cub Creek Precinct and there Mennonites developed seven small, somewhat isolated hamlets or "line villages" of Rosenort, Rosenhof, Rosenfeld, Rosental, Neuanlage, Heuboden, and Blumenort. The Jansen community at one time had six different Mennonite churches operating: Kleine Gemeinde which was the largest (150 members; and operated in the years 1874-1908); Evangelical Mennonite Brethren, now known as the Jansen Bible Church (150; 1879 to present time); Krimmer Mennonite Brethren (50; 1880-1916); General Conference Mennonite (popularly called Peter Jansen's Church, comprised largely of the personnel on Peter Jansen's ranch, 6 to 8 families, 1890-1909); Mennonite Brethren (50; 1901-1947); Reformed Mennonites (four or five families who held services in homes were never formally organized. Some of this group still lived in the vicinity of Jansen in the 1950s.)

Most of the immigrant Mennonites bought farms and wanted their houses and barns to be clustered together in a small hamlet as they were in Russia. To do this they established "line villages." These "line villages" were established on both sides of a section line and the farms usually extended in a long narrow strip. Thus the farms were usually one mile ( 1.6 km) long and varied in width from about a few hundred feet (~35-100 m) to a quarter mile (402 m) or occasionally wider. The quarter mile wide farms thus contained 160 acres and the narrower ones less. This made an unusual pattern of narrow strip farms. Over the century that followed most strip farms disappeared as many second and third generation American Mennonites integrated into the standard agricultural ways of American culture and many Mennonites in the early part of the twentieth century moved out of the Jansen area to better crop land in Kansas or to other states and non-Mennonites acquired the farms.

Though the Janzen area did not have the best farm land the Mennonite delegates, experienced farmers, scouting the great plains in 1873, thought it was good enough and quite good for sheep raising. In pioneer times Jansen area Mennonites raised hay and grain crops but relied on income from sheep, geese and cows. In Russia in the 1870s the silk industry was profitable and Mennonites in the Jansen area brought that skill with them and soon planted Mulberry trees and imported silk worms. Unfortunately the silk industry never really thrived for inexpensive silk from Japan made their efforts uneconomical.

In 1886 the Chicago, Rock Island, and Pacific Railroad was extended into the Jansen area and on 1 October of that year Peter Jansen deeded 80 acres (32.4 ha.) to the town and he soon began selling lots. Though Peter Jansen was responsible for having inserted into the original deed of each town lot in Jansen a clause which prohibited the sale of liquor in the town of Jansen, an error in one deed nullified this clause in all. Though the population of Jansen remained small, a number of town businesses thrived and it became one of the leading villages in the county. In 1910 it reached its maximum population of 308 and since then has fallen to an estimated 114 in 2017.