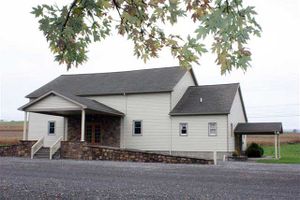 The Millmont Mennonite Church, in Millmont, Pennsylvania, USA, began as a Summer Bible School under the direction of Amos Hershey. It was held from 1951-1954 as an outreach of the Hershey Mennonite Church (Lancaster Conference).

After the Hershey Mennonite Church discontinued sponsoring this outreach in Union County, Amos Hershey continued to visit this area. In 1962, he was asked to direct a Summer Bible School in the area under the leadership of the Juniata District of Lancaster Conference.

The interest of the community in Bible school led to holding church services. The first service was held 11 November 1962 in the former high school building in nearby Hartleton. The Norman Yoder, Norman Groff, and Crist Yoder families founded the new congregation.

In 1963 the congregation purchased a small empty Methodist church on 2nd Street in the village of Millmont for $3,000. This white structure was built in the late 1800s by the German Baptist Brethren, Methodist Episcopal, Lutheran, and Presbyterian denominations who worshiped in it on a rotating schedule. The property was deeded to the Methodists in 1899. The Mennonites held their first service in this meetinghouse 28 July 1963, with a dedication service on 13 October 1963.

The Wayne Kauffman family increased the number of families at Millmont to four. They were followed by the Paul Longenecker family in 1964, the Howard Weaver and Elam Metzler families in 1965, and the Paul Kilmer family in 1968. Deacon Eli Graybill from Juniata County and Amos Hershey helped with preaching in the early days. The first ordination was held 13 March 1966 when Norman Yoder was ordained as minister. Paul Longenecker was ordained as deacon on December 10 of the same year.

With only a small entryway and auditorium, the building soon was not adequate for the growing congregation. There was no room for expansion on the tiny lot so land was purchased on the outskirts of the village. A basement was constructed and in the fall of 1971, after the belfry was torn away, a truck pulled the little church house on wheels the short distance to the new location. An addition was built on the east end where the belfry had been to provide indoor restrooms, a stairway to the basement, and a vestibule.

Howard Weaver was ordained as minister in 1974 and bishop in 1984. In 1978 the decision was made to transfer affiliation from Lancaster Conference to Mid-Atlantic Mennonite Fellowship (MAMF). David Swartzentruber joined the ministry after he moved into the area from South Carolina in 1981. James Weaver was ordained as deacon 27 January 1985, to replace retiring Paul Longenecker.

During 1988-89, the growing congregation added a new auditorium on the north side, installed new benches, and transferred the pulpit from the west end to the north. The old section was completely remodeled and the former little Methodist meetinghouse was no longer recognizable. In 2012 the building had a face-lift when tan siding replaced the white of many years, new windows were installed, and stone was laid.

In 1997, when the congregation had outgrown the facilities, an outreach was established near Milton. A group of about 50, including Bishop Roy Longenecker, became part of the new congregation named Shalom Mennonite Church. In 2003, Philip Siegrist was ordained as deacon at Millmont to assist James Weaver.

Roy Longenecker requested a release from bishop responsibilities at Millmont on 19 October 2009. In 2010, Jonathan Schmidt of the Haycock congregation was appointed by MAMF to serve as bishop at Millmont. Minister David Swartzentruber and deacon James Weaver resigned in the fall of 2010. A year later, Nathaniel Reiff was ordained as minister on 18 September 2011.

In 2012, the Millmont and Pleasant View (MAMF) congregations partnered to found a mission church in Wilkes-Barre, Pennsylvania. On 16 September 2012, Mark Weaver, of the Millmont congregation, was ordained as pastor for the developing church.

In 2013, the ministry team at Millmont consisted of ministers Lewis Hoover and Nathaniel Reiff, deacon Philip Siegrist, and Jonathan Schmidt serving as interim bishop. Membership as of 1 January 2013 was 83.