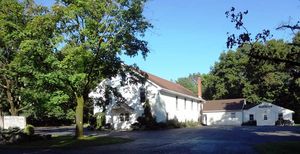 The Haycock Mennonite Church, Quakertown, Pennsylvania, USA, was one of seven mission churches established by the Franconia Mennonite Conference in the 1930s. The congregation was unaffiliated from 1970-2005 when it became part of Mid-Atlantic Mennonite Fellowship (MAMF).

The first gathering for the new mission in Haycock was a cottage meeting in the Roberts home. Several men canvassed the community and found 15 homes that were open to have a service. Through the distribution of The Way paper, they became acquainted with many people who expressed an interest in attending services if a church was established.

Finding a suitable building for worship services proved to be difficult. The Haycock School Board was contacted and permission was eventually granted to rent the one-room New Harrisburg schoolhouse.

The first Sunday school was held in the New Harrisburg schoolhouse on 14 November 1938. Twenty-eight persons from the community and 35 members from local Mennonite churches attended this service. The first preaching service was held 5 May 1938. Four souls from the community responded to the invitation at a week of revival meetings in August and were baptized on 13 November 1938.

By 1940, the congregation had outgrown the schoolhouse and needed a larger facility. A man from the community, Mr. Greishaber, offered to donate a plot of land for a church. The brush and rocks were removed and a concrete block building was constructed. The building was dedicated on 25 January 1942.

A 20-foot addition was made to the front of the church building in 1952 to provide indoor bathrooms, a nursery, and additional classrooms. At this time the entrance was changed so the steps to the auditorium were inside the building and the outdoor entrance was on ground level. A few years later, the electric lines came through and the temperamental Delco generator which had provided lighting was retired.

Haycock was established as a mission to the community and continued to focus on reaching out to the surrounding area. Several buses were used to bring children to Summer Bible School. The highest average attendance was 230 in 1955. Two tents were set up to hold the overflow and some classes were held at tables under the trees. In 1962 the congregation built an auxiliary building behind the church that would provide a permanent shelter for Bible School classes as well as sewing circle and youth activities.

In 1970 the Haycock and Lansdale congregations requested a release from the Franconia Conference and became unaffiliated but enjoyed fraternal relations with other similar Mennonite congregations.

Haycock and Lansdale organized the Lahay School which opened with 26 students on 5 September 1970, in Haycock's auxiliary building. A gymnasium was built behind the church in 1981 and connected to the school.

Deacon Ammon Moyer died on 9 December 1976, at the age of 59. On 24 April 1977, John F. Schmidt was ordained to fill the vacancy. As Stanley Beidler approached retirement age, he requested an ordination for a minister. John Schmidt's son, Jonathan, was ordained as minister on 12 December 1982 and bishop in 2001. Randy Bridge was ordained as deacon in December 1991 and as minister in 2000. Other ordained men who served during the time Haycock was in Franconia Conference and unaffiliated were Fred S. Brenneman, Merrill Landis, and David Miller.

As people moved in various directions, membership at Haycock dwindled and the congregation felt the need for the support of a larger fellowship. The congregation applied for acceptance into Mid-Atlantic Mennonite Fellowship in 2005. This request was granted and Haycock became part of MAMF on 17 October 2005.

Andy Emrick was ordained as deacon on 26 August 2007. He was the first person to be ordained at Haycock by MAMF.

Haycock Mennonite Church (Mennonite Church), located near Applebachsville in Haycock Township, Bucks County, Pennsylvania, member of the Franconia Conference, originated in 1937. It was at first a mission outpost with services conducted in a schoolhouse; a church building was erected in 1941. The first minister, Stanley Beidler, was ordained in 1942 (bishop, 1943). By 1940 the membership was 10. In 1953 it was 77.