Research in Mennonite history, begun in the middle of the 19th century by German historians, revealed the bias with which the origin and growth of the Anabaptist-Mennonite brotherhood has been treated in most works of history. This revelation stirred up a desire in Mennonite circles for further information on their own history.

The constitution of the Vereinigung ( i.e., Conference of German Mennonite Churches) provided for the publication of historical material; its support indeed made the publication of several historical works possible. At a meeting of this conference on 20 June 1932, in Altona, the task of promoting the publication of historical materials was put in the hands of a committee organized for that purpose, and in April 1933 the Mennonitischer Geschichtsverein (Mennonite Historical Society) was founded. The executive committee of four members was composed of Christian Neff of Weierhof, Ernst Crous of Berlin, Christian Hege of Frankfurt, and Hendrik van Delden of Gronau. Five other members of the society were chosen to work with the executive committee: Abraham Driedger of Heubuden, Erich Gottner of Danzig, Fritz Kliewer of Berlin, B. H. Unruh of Karlsruhe, Walther Kohler, an outstanding Reformation scholar of the University of Heidelberg. The society has its seat at Weierhof. The general meeting of the society was in the beginning regularly held in connection with the Mennonite Day (Mennonitentag). 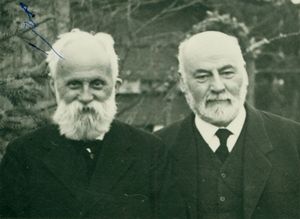 The constitution defined the work of the society as collecting documents and copies of material on Mennonite history, publishing source material and articles on this history, collecting and distributing works on Mennonite history, supporting the publication of works on the subject, and the promotion of family history. The annual fee was a minimum of two marks. By 1939 the society had 280 members.

Since 1936 (suspended 1941-1948) the society has published the annual Mennonitische Geschichtsblätter with 60-100 pages, which the members receive free of charge. The periodical presents matter on various events in the changing history of the Mennonites. For more exhaustive treatments provision is made in a special series of pamphlets, the Schrijtenreihe (Historical Series). The first issue of this series appeared in 1938 with the title, Beiträge zur Geschichte der Mennoniten, Festgabe für D. Christian Neff zum 70 Geburtstag. -- Christian Hege.

After the political collapse and the death of Hege (1943) and Neff (1946) the work was resumed in 1947 by a general meeting at Thomashof. Membership reached 856, but after the currency reform (1948) receded to about 600. In 1948 the general meeting was held at Gronau in Westphalia; here the Gottingen Mennonite Research Center (Mennonitische Forschungsstelle Gottingen) was established; in 1952 a new constitution was adopted; in 1953 legal rights acquired. In 1949-1956 eight issues of the Geschichtsblätter appeared (Nos. 6-13), and in 1954 the fourth number of the Historical Series, viz., Paul Peachey's Die soziale Herkunft der Schweizer Täufer in der Rejormationszeit. In 1955 the general meeting held at Gottingen elected the following executive officers: Ernst Crous, Horst Quiring, Paul Schowalter, Gerhard Hein, and Gerrit van Delden. An assisting council was also elected: Harold S. Bender, Abraham Fast, Samuel Geiser, Fritz Hege, Kurt Kauenhoven, Cornelius Krahn, Gustav E. Reimer, Walther Risler, Otto Schowalter, Erich Schultz, B. H. Unruh, and N. van der Zijpp.