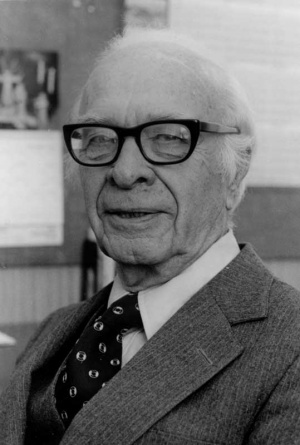 Cornelius Krahn, noted 20th century Mennonite historian, writer, editor and teacher, has contributed significantly to scholarship about Dutch Anabaptism and to the preservation and dissemination of Mennonite history.

Born 3 August 1902 to Mennonite parents in Chortitza, the Ukraine, Krahn left the Soviet Union in 1926. He studied church history and theology in Bonn, Berlin, and Amsterdam. In 1936, at the University of Heidelberg, he completed a dissertation on the life of Menno Simons. The following year, Krahn entered the United States, where he studied languages at Bethel College in North Newton, Kansas and at the University of Wisconsin. From 1939-1944 he taught at Tabor College in Hillsboro, Kansas. In 1940 he married Hilda Wiebe of Beatrice, Nebraska.

A member of the Bethel College faculty from 1944 to 1974, Krahn taught church history and Russian history as well as German. He served as director of the Bethel College Historical Library (Mennonite Library and Archives). Working from a small collection begun by Abraham Warkentin, Krahn developed a major historical library emphasizing Dutch, Prussian, and Russian Mennonite materials. In 1946 he founded the quarterly magazine Mennonite Life, and for the next 25 years served as its editor.

In 1953 he received a Fulbright Fellowship to pursue research in The Netherlands on religious life during the Reformation; his book, Dutch Anabaptism: Origin, Spread, Life, and Thought (1450-1600), appeared in 1968. In addition, Krahn wrote or edited more than 18 books and leaflets and published articles in Mennonite periodicals and scholarly journals. As assistant editor of the four-volume Mennonite Encyclopedia (published 1955-1959), he contributed 686 articles. In the late 1960s he edited, assisted by Melvin Gingerich and Orlando Harms, a slightly revised reprint of the Mennonite Encyclopedia.

Krahn helped to shape several historical projects, including the North American Committee for Documentation of Free Church Origins, which formed in 1963. He served for many years on the Historical Committee (General Conference Mennonite) and the Western District (General Conference Mennonite) Historical Committee. After his retirement from Bethel College in 1974, he traveled and lectured widely, and continued to collect rare books and other materials pertaining to Mennonite life and thought.

The files of Cornelius Krahn are located at the Mennonite Library and Archives, Bethel College (North Newton, Kansas, USA).