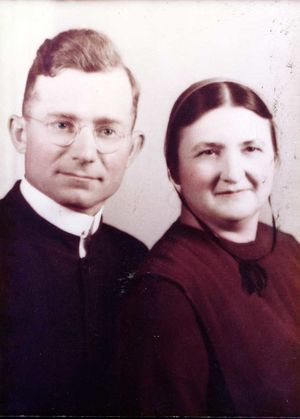 Eli D. Kramer: minister, bishop and a founder of the Nationwide Fellowship Churches, was born in Reno County, Kansas, USA on 26 December 1899 to Daniel J. Kramer (5 May 1868-22 September 1944) and Mary Ann Schlabach Kramer (14 March 1878-29 October 1955). Eli was the fourth child and third son in a family of nine sons and six daughters. Daniel and Mary Ann Kramer were Old Order Amish farmers, who moved to the Plain City, Ohio, area when Eli was very young. On 16 November 1922, Eli Kramer married Mary Ann Miller (22 May 1901-27 June 1989). They had two sons and two daughters. Eli D. Kramer died of cancer on 23 October 1966. Mary Ann Kramer, who married Jonas M. Hershberger on 6 February 1971, died in Virginia in 1989. Eli and Mary Ann are buried in the Pilgrim Mennonite Church cemetery in Amelia, Virginia.

As an Old Order Amish boy, Eli Kramer would have received a rudimentary public-school education. He became a member of the Old Order Amish church in 1916. He met his future wife when she cared for the Kramer family during the influenza outbreak in 1918; an outbreak the whole family survived. After marriage, in a search for greater assurance concerning their spiritual state, the young couple began to attend nearby Mennonite churches in addition to their own Amish services. Eli was converted at evangelistic meetings at the Oak Grove Mennonite Church near West Liberty, Ohio in 1925, and soon Eli and Mary Ann became members of that congregation, where they had a close relationship with Bishop Samuel E. Allgyer. On 3 December 1933 Eli was ordained by lot as a deacon for the Sharon Mennonite Church, a new congregation at Plain City that grew out of the Oak Grove Church. He had earlier been in the lot to serve as minister of the new congregation.

In 1936 Eli and Mary Ann Kramer responded positively to a call to serve the Mennonite mission church at Meadville, Pennsylvania, and they moved there in early 1937. During his time at Meadville, Eli Kramer needed to be self-supporting during the difficult Depression years. He lost one job because he refused to join a labor union. He continued to advocate other conservative positions that were not appreciated by some within the congregation. This was a time of deep poverty in the family.

In 1945 the Kramer family moved to Deep Creek, Virginia to help the congregation there. Their oldest son, Raymond, became the pastor at Meadville soon after Eli and Mary Ann moved to Virginia.

Eli D. Kramer was finally ordained as a minister at Deep Creek on 16 December 1945. He was ordained as bishop for the Norfolk District of the Virginia Conference on 6 June 1948. This gave him charge also of the neighboring Mt. Pleasant Mennonite Church, the Norview Mennonite mission, and later the Pilgrim Mennonite Church at Amelia, Virginia, an outreach of the Deep Creek congregation that came in response to the rapid population growth and increase in military base activity in the Norfolk, Virginia area after World War II.

Eli Kramer’s efforts to enforce discipline in the local churches met resistance, especially at Mt. Pleasant, where some members joined labor unions or purchased life insurance, some women began to wear jewelry and to cut their hair, and men wore ties instead of the “plain” coat. Finally, in 1957 Kramer declined to offer communion to the Mt. Pleasant congregation. He did not feel supported by conference leaders, and in 1959 two outside bishops offered communion to Mt. Pleasant without notifying Bishop Kramer.

On 8 November 1959 Eli Kramer, at a Sunday morning service at the Pilgrim Mennonite Church, announced he was withdrawing from the Virginia Conference. In December 1959 the Pilgrim congregation and a significant portion of the Deep Creek congregation also withdrew from conference, and asked Eli Kramer to continue to be their bishop. The Hope Mennonite Church formed from members departed from Deep Creek; this congregation eventually relocated to Pantego, North Carolina in 1964 because of the continued urbanization in the Norfolk area.

A new congregation, Faith Hills Mennonite Church, at Crockett, Kentucky was also launched in 1960 by persons who had withdrawn from conference; its members asked Eli Kramer to serve as bishop. This congregation, led by Paul M. Landis, was the core of the new Rod and Staff Publishers that produced literature for non-conference conservative Mennonites. Kramer’s congregations all became part of what is now the Nationwide Fellowship Churches.

Because of concerns at the Pilgrim Mennonite Church, Eli and Mary Ann Kramer moved to Amelia, Virginia in 1964. Eli was diagnosed with cancer soon after.

Eli D. Kramer was uncompromising in his views and gave great emphasis on holiness in one’s personal life. He believed that simple obedience and purity in everyday life was required to meet the demands of a holy God.