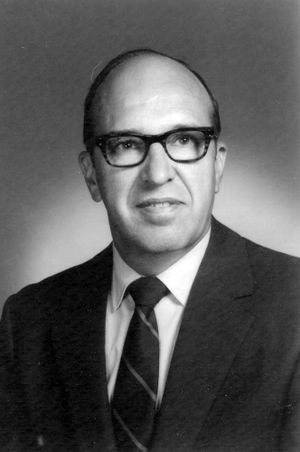 J. Howard Kauffman: sociologist of Mennonite family life, was born in West Liberty, Ohio, USA on 4 October 1919 to Earl Vernon Kauffman (29 May 1894-4 June 1976) and Mary Ann Smucker Kauffman (4 November 1893-29 September 1987); he was the oldest of three children. He grew up on a farm near West Liberty, and went to Goshen College (Indiana) in the fall of 1939, interested in math education. Halfway through his college career Howard was drafted and left for the first of four Civilian Public Service (CPS) sites, in Marietta, Ohio. A year and half later he moved to Luray, Virginia, before his transfer to Ypsilanti, Michigan, and then to Powellsville, Maryland. On 26 November 1944, just before moving to Maryland, Howard married Verda P. Lambright (9 March 1921-22 December 2011), a college friend from Shipshewana, Indiana. J. Howard and Verda had four daughters, Lois, Ruth, Alice and Carol. Howard died 21 November 2003 at his home in Goshen, Indiana. J. Howard and Verda Kauffman are buried in the Violett Cemetery in Goshen.

In the fall of 1945 Howard and Verda Kauffman returned to Goshen College where he shifted his focus of study to sociology. In his words, "When I got out of CPS I was more interested in human problems than math problems." Howard had been exposed to sociology as a student assistant for Guy F. Hershberger for a year prior to his CPS service. By the end of junior year, Howard had so impressed the two sociologists on campus, Hershberger and H. S. Bender, that Dean Carl Kreider suggested that he complete his degree in sociology, continue for a master’s degree and then return to teach at his alma mater. Like many in his generation, Howard followed the advice of his mentors. He graduated from Goshen in 1947.

Howard earned his master's degree in rural sociology from Michigan State University in 1948 and in the same year began his teaching career at Goshen College.

In 1954 Howard took a leave of absence from Goshen to begin doctoral studies at the University of Chicago. He initially studied urban sociology with faculty in the renowned "Chicago School," serving as a research assistant to Ernest W. Burgess, before shifting his interest to family issues. After two years of course work he resumed teaching at Goshen College and completed his doctorate in 1960. His dissertation—a study of 149 representative Mennonite families—was the first major research project on Mennonite families.

Howard taught at Goshen College until his retirement 1984. He taught the Marriage and Family course to thousands of students, and many others learned basic social science research methods from him. He also introduced students to many of his other interests such as cultural anthropology, African societies and cultures, and social geography.

Howard is perhaps most well known for his contributions more generally to the Mennonite church and to Mennonite studies. He worked closely with the Mennonite Quarterly Review and served as treasurer of the Mennonite Historical Society for many years. In addition to numerous journal articles Howard published two landmark studies of Mennonites based on a comprehensive "Church Membership Profile" survey. He wrote the 1975 publication, Anabaptists Four Centuries Later, in collaboration with Leland Harder and then co-authored The Mennonite Mosaic, which appeared in 1991, with Leo Driedger.

In his work, Howard was always gracious and humble, remembered by all who knew him for his winsome smile. He cared deeply about the Mennonite church and had unwavering commitment to the mission of Goshen College.