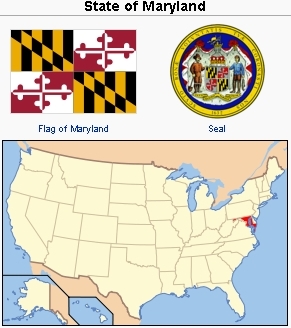 The state of Maryland has an area of 12,407 square miles (32,133 km²) and an estimated population in 2008 of 5,633,597. Maryland was one of the original colonies, lies on the southern border of Pennsylvania, and extends for almost four fifths of the length of Pennsylvania. 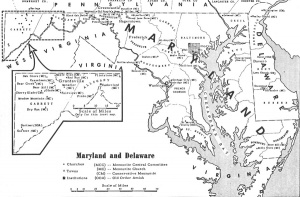 (1) Washington County, Maryland, bordering Franklin County, Pennsylvania, first received Mennonite settlers of Lancaster County, Pennsylvania, background shortly before the Revolutionary War, the oldest congregation (Miller) near Leitersburg, the second (Clear Spring) near Clear Spring in 1810, and the third (Stouffer) near Edgemont in 1820. From these, two later congregations grew (Paradise, 1897; Maugansville Home, 1923) and three mission stations (Pinesburg, 1923; Flintsone, 1925, just across the border in Allegany County, and Pondsville, 1954). These nine congregations, with a total of 831 members, constituted about one half of the Washington County, MD, and Franklin County, PA, Conference (organized in 1790), which was closely related to the Lancaster Conference and was very conservative in customs, practices, and activities. It had one institution, the Mennonite Old People's Home at Maugansville, Maryland, founded in 1923. The Brook Lane Farm Mental Hospital, operated by the Mennonite Central Committee, was located near Hagerstown, but was not under the conference. In the same county was one congregation, Black Oak Bethel near Hancock, founded in 1953, which belonged to the Ohio and Eastern Conference.

(2) The second original settlement was made in Garrett County as an integral part of the Amish settlement in southern Somerset County, Pennsylvania. The Maryland side center of the settlement was Grantsville, which began in a small way about 1770. This area was in the valley of the Casselman River and so has long been called the Casselman Valley district. The original settlement here was Old Order Amish, founded quite early, and largely built up by immigrants from Hesse and Waldeck in 1830-1860. Since numerous Amish families from here moved westward to Holmes County, Ohio, and Johnson County, Iowa, before 1860, the community never grew large. Furthermore it ultimately became almost totally Conservative Amish or Beachy Amish, with the exception of those who joined the Mennonite (Mennonite Church) congregation called Springs, whose meetinghouse was located just two miles across the border in Pennsylvania, and which had been built up largely of transfers from the several Amish groups in the community. This congregation in turn began to establish Mennonite (MC) outposts in Maryland, which by 1900 had resulted in the organization of three congregations, Casselman (first meetinghouse 1889), Oak Grove (first meetinghouse 1900), and Glade near Accident (first meetinghouse 1908). The Conservative meetinghouses at Maple Glen and Cherry Glade were built in 1881. About 60 miles southwest of Grantsville, an Old Order Amish settlement was started about 1850 near Gortner, not far from Oakland. By 1898, a Mennonite (MC) congregation had been established here, called Gortner. The last new settlement, formed from the Springs congregation, was that which resulted in the Pinto congregation (1927), about 15 miles south of Cumberland. From Pinto a mission church was established in Cumberland in 1952. Seven other Mennonite (MC) mission points were established in the area around the older churches in northern Garrett County 1935-1955. All of these Mennonite congregations and missions in Garrett County and Allegany County belonged to the Allegheny Conference (MC). A total of twelve congregations and missions had 417 baptized members here. The Conservative congregation had 230 members, although part of the membership lived across the line in Pennsylvania. A children's home conducted by this congregation and the Conservative Conference for many years was closed in 1950.

In Eastern Maryland from 1925-1955 nine mission stations were established by the Lancaster Conference with a total membership of 178, one at Cottage City (1927), Maryland, at the eastern edge of Washington and one in Baltimore (1952). On the eastern shore of Maryland were two congregations of the Ohio and Eastern Conference, Holly Grove near Westover in Somerset County (1919), and Snow Hill (1953) in Worcester County near the Atlantic Coast, the two having a total membership of 109. A Beachy Amish congregation was established near Chestertown across the Chesapeake from Baltimore, with 30 members. An Old Order Amish settlement was established in St. Mary's County near the James River in 1950. Mennonite and Amish membership in Maryland in 1955 was distributed as follows: Washington County-Franklin County Conference 9 congregations with 831 members, Allegheny Conference 12 with 417, Lancaster Conference 9 with 178, Ohio and Eastern Conference 3 with 159, Conservative Conference one with 230, Beachy Amish one with 30, and Old Order Amish 2 with 71, a total of 37 congregations or missions with 1,916 members. -- Harold S. Bender

While a number of mission stations of the Mennonite Church (MC) have been closed, the Highland Association, a cooperative ministry of the Mennonite Church (MC) and Beachy Amish Mennonite Fellowship had a strong witness in Garrett County, including regular visitation in some 50 homes, providing both a social and spiritual ministry and material aid in a low-income area. At Gortner in southern Garrett County, Conservative Mennonites and the Church of the Brethren worshipped together in a union church. At Menadier Ridge near Grantsville, Harvest Baptist Church had a significant ministry in a one-room school owned by Highland Association.

Since 1957 Mennonites have established 10 private schools with enrollment in 1988 numbering 636. The Paradise school near Hagerstown combined special education with a ministry to the hearing impaired. Mennonite services and institutions included Brooklane Psychiatric Center, Hagerstown (1945), sponsored jointly by Mennonites and Church of the Brethren; two nursing homes at Grantsville and Maugansville; one group home for retarded adults at Silver Spring; student and young adult services in Baltimore; an MCC Ten Thousand Villages Crafts Shop in Hagerstown; and a private self-help shop in Grantsville. Highland Association also opened a thrift shop in Grantsville in 1987 and operated a community center in Jennings, with services for preschool children and senior citizens and other community programs.

Mennonite archives were established at the Casselman Hotel in Grantsville (1987) by a group including Mennonite Church (MC), Conservative Mennonite, Beachy Amish Mennonite Fellowship, and Old Order Amish members. Also in 1987 an Anabaptist Peace Center was initiated by Penn Alps, Inc., in a restored log house on its campus just east of Grantsville. It is closely associated with a craft village complex in which 8 to 10 artisans work during the summer months, attracting thousands of guests who will be exposed to the Anabaptist love and peace ethic. -- Alta E. Schrock

Wittlinger, Carlton O. Quest for Piety and Obedience: The Story of the Brethren in Christ. Nappanee, IN: Evangel Press, 1978: 129-132.