Ingolstadt, a city (population 40,270 in 1955; 121,000 in 2007; coordinates: 48.763611, 11.426111 [48° 45′ 49″ N, 11° 25′ 34″ E]) on the Danube in Upper Bavaria, Germany, became the residence of the dukes of Bavaria-Ingolstadt in 1392. The university, founded in 1472, transferred to Landshut in 1800 and then to Munich in 1826, played an important role during the Reformation period through the activity of several of its professors of theology. Some of them were active opponents of the Anabaptist movement, as Dr. Johann Eck, Luther's well-known opponent, and Urban Rhegius , who later became the Lutheran preacher in Augsburg. The later Anabaptist leader Balthasar Hubmaier earned his doctor's degree here; he was called in 1512 as professor of theology, and in 1515 was made Prorector of the university; in addition he preached at St. Mary's. Another prominent Anabaptist who studied here was Hans Denck; he was matriculated on 29 October 1517, and was given the bachelor's degree in 1519.

In 1543 a Hutterite from Allgäu by the name of Damian (Thaman) was seized in Ingolstadt as he was about to leave for Moravia, and was burned at the stake when he would not recant. His courage and steadfastness aroused admiration among the spectators (Beck, 154).

The death of a second Anabaptist martyr executed in Ingolstadt, Michel Fischer, is commemorated in a Hutterite song. After a 12 weeks' imprisonment he was beheaded on 7 August 1587 after a vain attempt by the Jesuits to convert him (Die Lieder der Hutlerischen Brűder, 785).

The first settlement of Jesuits in Bavaria took place at Ingolstadt in 1549; they took over a chair of theology at the university. When the Hutterian martyr Christian Gasteiger was thrown into prison here on 30 May 1586, the Jesuits visited him by two's (for the purpose of converting him) during the 12 weeks of his imprisonment as well as after his transfer to Munich, where he was executed on 13 September. Opposition to the Anabaptist movement also took literary form at Ingolstadt. Thus in 1576 Dr. Kaspar Franck published here his catalog of heretics, which pays special attention to Hubmaier and Denck. Here too the propaganda of Christoph Erhard and Christoph Andreas Fischer was printed; they were Jesuits of Ingolstadt (Jöcher's Gelehrten-Lexikon).

When Elector Max Joseph, who became King Maximilian I Joseph of Bavaria in 1799, took over the government he eliminated the Jesuit control of government under his predecessor Karl Theodore and proclaimed complete religious liberty in Bavaria. The country was now open to the Mennonites. The ruler, being acquainted with their agricultural achievements in his home at Zweibrücken in the Palatinate, welcomed them. They settled in various places between the Danube and the Alps, where representatives of their faith had been martyred in the 16th century.

A number of Amish families settled near Ingolstadt. The first family to settle here, the Suttors from St. Goar on the Rhine, acquired the former monastic estate Hellmannsberg about 1810. From Hesse and Alsace followed families by the name of Oesch, Oswald, Ingold, and Güngerich, of the Amish branch. They organized a congregation about 1810 and held services in their homes. 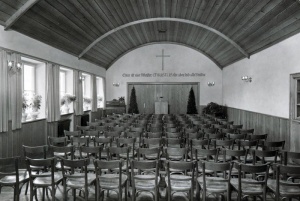 In the middle of the 19th century other Mennonites from the Palatinate and at the turn of the century from Lower Franconia and Baden, settled in the vicinity of Ingolstadt. They joined the Eichstock-Singern church and were served by the preachers of that congregation: Michael Landes and Daniel Lichti from Au. In 1891 a new Mennonite congregation was formed, known as Rottmannshart (near Manching) where Michael Landes (served as elder at least from 1902 to his death in 1927) later lived, which later moved its seat to Ingolstadt. At the death in 1912 of preacher Güngerich of the Amish branch the two congregations united. In 1930 it had 90 baptized members. It held the meetings in a rented hall in Ingolstadt, until a meetinghouse was built in 1952, and also in Rottmannshart and Niederfeld. The elder in 1925-1949 was Michael Horsch of Hellmannsberg; after then Eduard Landes and Hellmut Horsch served as elders. The membership in 1955 was 135, including 40 unbaptized children.

The members lived scattered as far as 55 miles (95 km) apart. Therefore those living up the Danube formed a separate church in 1912 at Donauworth , which was transferred in 1926 to Augsburg.