Christoph Andreas Fischer, a Jesuit priest, was one of the most aggressive opponents of the Hutterite Brethren in Moravia around 1600. He was born in Glatz, Silesia, was educated as a cleric at the Jesuit colleges of Vienna and Rome, where he seems to have received also his theological doctorate. In the 1590s he returned to Vienna and soon after became the parish priest of Feldsberg, Lower Austria, near the Moravian border. He was one of the many fighters in the great Catholic Counter Reformation in Austria, and should be grouped together with Georg Eder, Christoph Erhard, and the Jesuit Cardaneus, the father confessor and biographer of Cardinal Franz von Dietrichstein, all of whom fought relentlessly both the Lutherans and the Anabaptists. Their program allowed no further compromise (as in the days of Maximilian II) but aimed at complete elimination of all non-Catholics. That the relative tolerance of the Moravian nobles toward the Hutterites and their economic activities was to these men a real "scandal" can be easily seen; they tried to oppose it with every possible means. In many regards Fischer was more dangerous than Eder or Erhard because he did not confine his polemics to the religious field, but attacked the Brethren above all from an economic angle, appealing to the jealousy of the surrounding population and denouncing the economic prosperity of Hutterite large-scale farming and crafts. It seems, however, that the manorial lords of southern Moravia, knowing their own advantage, protected the Brethren and were fairly immune to the invectives of Fischer.

Although Fischer must have known the Brethren from personal contact, he yet was also familiar with the polemical writings of his forerunners; he quotes Eysvogel's Lied and repeats his arguments in detail.

Four books or pamphlets are known from his pen: (1) Von der Wiedertauffer verfluchtem Ursprung, gottlosen Lehre, und derselben gründliche Widerlegung. Nach welcher gefragt wird, ob die Wiedertaufer im Lande zu leiden sein oder nicht . . . 1603, gedruckt zu Brück, an der Teya. It was dedicated to the lord Karl von Liechtenstein (a family once much in sympathy with the Anabaptists). In its first part Fischer describes the "heretical doctrines and vices" of the Brethren; he knows surprisingly much of the (manuscript) literature of the Brethren which must have circulated then among the neighboring population. Often he also quotes Peter Riedemann's Rechenschaft. In its second part he exhorts the Viennese authorities to wipe out and exterminate these Brethren without mercy, else they would spoil all good "Christians."

To this pamphlet the Hutterite Vorsteher (bishop) Klaus Braidl, a man of strong and upright character, answered with a pamphlet, Ein Widerlegung und warhafte Verantwortung der alten, grausamsten, abscheulichen . . . Gotteslesterung, Schmach und unwarhaftigen Beschuldigungen so Christoph Andreas Fischer . . . über uns Brüder erdacht (n.p., 1604), defending the Brethren as well as he could against all these calumnies.

(2) Fischer replied with another booklet, Antwort auf die Widerlegung, so Clauss Breutel, der Wiedertauffer König oder Oberste sampt seinen Spiessgesellen hat getan . . . Gedruckt im Kloster Bruck an der Teya, Anno 1604 (156 pages). As text he uses Proverbs 26:5, "Answer a fool according to his folly, lest he be wise in his own conceit." In the main it contains but a repetition of number 1. It is necessary, he says, to forbid them all their farms, sheep runs, mills, etc. The nobles should not use their women as wet nurses for "Christian children lest they get all false ideas with their milk." In this book Fischer also reprints the great mandate (General Mandat) of the government of Emperor Rudolphus II of 1601 which ordered the expulsion of all Brethren from Austria within three months. The mandate also claims (with Eysvogel), and Fischer repeats it, that the Brethren snatch away profit and food from the artisans and the entire "Christian" citizenry of the country. 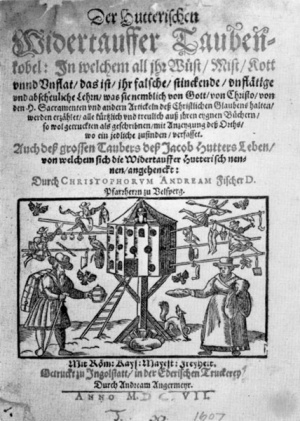 (3) The next book was dedicated to the lord Maximilian von Dietrichstein, otherwise known in the Hutterite Chronicle as being rather in sympathy with the Brethren. It has the inciting title, Der Hutterischen Wiedertauffer Taubenkobel, in welchem all ihr Mist, Kot und Unflat . . . zu finden, auch des grossen Taubers, des Jakob Huters Leben . . . angehängt. Durch Chr. A. Fischer, Gedruckt zu Ingolstadt . . . Anno 1607 (67 pages). The title page has a woodcut illustrating this simile that the Bruderhofs are like dovecotes where the brethren deposit all their refuse. Like doves they fly in and out (see illustration). These Bruderhofs are found in the finest places of the country. Again complete expulsion of the Brethren is demanded.

(4) The climax and worst type of this Brethren-baiting is the last pamphlet, entitled: 54 erhebliche Ursachen warum die Wiedertauffer nicht sein im Lande zu leiden.  Gedruckt zu Ingolstadt . . . Anno 1607 (54 Strong Arguments Why the Anabaptists Should Not Be Allowed to Live in This Country) (130 pages). The title page has the same woodcut as number 3: the symbolic dovecote. Its text is Exodus 22:18, "Thou shalt not permit a sorcerer to live" (the Bible has "witch" or sorceress). Among the many arguments he mentions also the fact that "the nobles run to the Brethren bathhouses and use their barbers and physicians, and also their drugs, as if no one else knew that art." Fischer claims that the Brethren taught contempt for the authorities. "They steal your religion and call you pagans and infidels." He closes about this way: "Do not allow your country to fall into the disrepute of being a den of murderers because of the presence of these murderers, adulterers, and renegade monks."

A vindication of the Brethren in the face of these slanders is hardly necessary; the article Economic History of the Hutterites provides some of the factual background of this hostile propaganda. At first Fischer's fight was not very successful since the lords wanted to keep these industrious people on their estates; even Cardinal Franz von Dietrichstein, the very head of the Counter Reformation in Moravia, kept the Brethren around Nikolsburg, at least for the next decade.

Fischer, however, seems to have moved away from this area, for already in 1607 he is in Ingolstadt, Bavaria, a famous Jesuit center, involved in a "collouquy" with William Laud, the later Anglican archbishop (died 1645), who published this debate in English. No further information about Fischer is available.