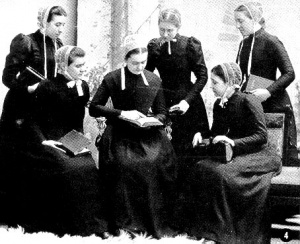 Understandings about headcovering illustrate the historic headship pattern of men telling women what to do and why. As women become more disciplined students of Scripture and express insight from personal experience of role subordination, traditional bias will be exposed for what it is and has done.

For example, teaching about headcovering has relied on the premise of created order in Genesis 2 and headship in 1 Corinthians 11. Interpretive bias suggests that women and men have distinct functions: men are leaders while women nurture and serve. Other careful translators of the texts understand such division to characterize what followed sin, rather than redemption. Their bias notes God's order to be genuine interdependence. Some point out that the Greek word exousia, often translated veil (1 Corinthians 11:10), is known to mean authority. Conviction will differ: when authority is identified as the woman's rather than as her husband's over her; when relationships in the body of Christ contrast rather than imitate those of the world.

Writers try to explain that role separation--symbolized through man's uncovered and woman's covered head--does not bless unequal value for woman and man. But research (Kraybill) conducted among more than 1,000 Lancaster County, Pennsylvania, parents and youth shows how the veil has legitimated female subordination. It also verifies that decline in veil wearing does not degrade ethnic identity or diminish support for ethnic institutions.

In addition to symbolic meanings of order and submission, women's headcovering traditionally fostered modesty, and opportunity for witness, particular identity and connection to worship. it expressed obedience and conformity, and both catered to and rejected broader cultural values.

Late 20th century trends in Mennonite Church (MC) practice (North America) include discontinuing the wearing of a headcovering, allowing diverse practice side-by-side, and reinforcing the expectation that women have their heads covered during worship. While more MC congregations (based on studies in Indiana and Ohio) support personal choice, which accommodates varied customs, other more conservative groups make even stronger appeals to conform to this expression of nonconformity. As more congregations called women to pastoral leadership, male power and one of its symbols was diminished. This, in turn, lead guardians of the tradition to buttress the claim that the prayer veil is of "Divine Order" and to remind Mennonite Church membership of Article 14 ("Symbols of Christian Order") in the Mennonite Church's 1963 Confession of Faith. The Confession of Faith in a Mennonite Perspective (1995) no longer mentioned the headcovering.

Mennonite churches worldwide also bring features of culture into patterns of headcovering. Whereas Swiss Mennonite women throughout the 20th century have not used a prayer veiling, German Mennonite usage diminished in the second half of the 20th century. As a rite of passage from girl to woman, a ritual part of Russian Mennonite marriage has included her donning a kerchief. This symbol of subordination to one's husband is worn by some Mennonite Brethren women at all times.

Mennonite women of India have naturally utilized the sari as headcovering for worship or expressing respect. Many African women see a head piece as part of their dressing. In contrast, to wear anything on the head while talking is improper in Japan. When headcovering expectations for Mennonite Church women were first articulated in the late 19th century they were problematic; further, an inconsistent message was given since General Conference Mennonite (GCM) groups did not expect the practice. For Mennonites worshiping in Israel, practice varies with the local church: with older churches of Christendom a veiling is worn while with mainline Protestant and Messianic Assemblies the custom is generally not followed.

Most Old Colony Mennonite women wear a headcovering all the time. Men wear hats except for worship and prayer. Associated with marital status rather than baptism, a single woman wears a white covering while married women wear black ones. Couples are more interdependent when a husband grants his wife permission not to wear the covering; less conservative people may wear a smaller kerchief.

"We Consider I Corinthians 11:1-16." prepared for the Mennonite Conference of Ontario under the direction of its executive committee. 1965, 24 pp.