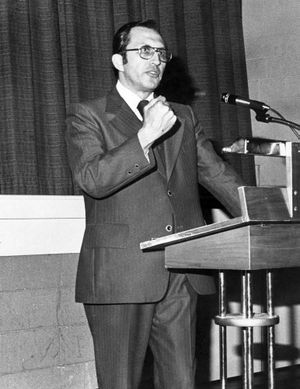 James Richard Clemmer Detweiler (the James was never used as an adult): pastor, bishop, educator and college president, was born 26 September 1924 in Souderton, Pennsylvania, USA to Elmer Moyer Detweiler (27 August 1901-30 October 1965) and Lillian Clemmer Detweiler (9 August 1901-4 April 1976). He was the oldest of two sons and one daughter. On 27 June 1953 he married Mary Jane Rudy (18 September1926-1 December 2005), daughter of James S. Rudy (19 May 1905-6 June 1957) and Alma Groff Rudy (1 May 1904-6 November 1991). Mary Jane, the second child and oldest daughter in a family of six children, was a public school teacher and principal with a BA in Secondary Education from Penn State University. Richard and Mary Jane Detweiler had three children—Donna, John and Elizabeth. Richard Detweiler died 23 September 1991; he and Mary Jane are buried in the Souderton Mennonite Church cemetery.

Richard grew up in Souderton, and attended the Souderton high school, from which he graduated in 1942. During summers and after school he worked at the family feed mill. Immediately after graduating from high school he worked as a reporter for a local newspaper, but was soon drafted and sent into Civilian Public Service, first at Hagerstown, Maryland and later at Sideling Hill, Pennsylvania. At Sideling Hill he suffered acute rheumatic fever and was discharged from service in 1944.

In September 1944 Richard Detweiler attended Eastern Mennonite College in Harrisonburg, Virginia, receiving a BA in 1949. While still attending college he received a call to pastor the Perkasie Mennonite Church. He was ordained 22 February 1948, and served that congregation until 1963. On 17 August 1954, not yet 30 years of age, he was ordained by lot as a bishop in the Franconia Mennonite Conference.

Richard Detweiler pursued graduate studies at Temple University (1960-1962), Princeton Theological Seminary (MDiv, 1966) and (MTh, 1967). In the late 1970s he worked on a DMin at Princeton, but did not complete the degree. In 1967 he was asked to become dean of Eastern Mennonite Seminary (EMS), but chose rather to accept the pastorate of the Souderton Mennonite Church, where he served until 1980. He did serve as Interim Dean at EMS in 1976/77.

During these years of pastoral leadership Richard was also active in administrative leadership roles within the Franconia Mennonite Conference, including service as moderator, and as director of a new “Leadership Training Program,” that included a Paul-Timothy course for mentoring new pastors.

Mary Jane Detweiler worked closely with her husband, and used her teaching skills in Sunday schools and leading Bible studies. She performed many volunteer tasks outside of the public eye, and was a gifted host of both parishioners and the many church leaders that visited their home.

In July 1981 Richard Detweiler became the sixth president of Eastern Mennonite College and Seminary (EMC&S), serving in that role until the end of June 1987. The biggest crisis of Detweiler’s tenure came in the 1984 fire that destroyed the Administration Building during a major renovation. The fire affected campus morale, and Detweiler faced the challenge of slumping enrollments and budget cuts that affected faculty and programs. By the time he left EMC&S, however, the student population was on the increase again and a new Campus Center was erected on the hill where the “Ad” Building had once stood.

In 1987/88 Detweiler served as Interim Pastor of the Harrisonburg Mennonite Church, before he and Mary Jane returned to Pennsylvania. He became the Franconia Conference’s Director of Pastoral Education, a role he held until his death.

In May 1991 Richard Detweiler began to feel tired, and experienced pain in his abdomen. In late August it was diagnosed as pancreatic cancer that had spread. Less than a month later he died in the Grandview Hospital in Sellersville, Pennsylvania.

Richard Detweiler was a skilled administrator and thoughtful preacher combined with a desire to improve the practical training of Mennonite ministers in the late 20th century world.