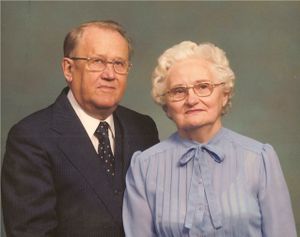 John Harder immigrated to Canada with his parents and siblings in 1924, settling in Arnaud, Manitoba. John helped establish the family farm, then began grade nine at 19 years of age at Mennonite Collegiate Institute in Gretna. Normal School in Winnipeg followed, and then teaching in Manitoba from 1934-1943. In 1943, John and his first wife Mary returned to Arnaud to help manage her parents’ general store. In 1946, they took over the running of the business. After Mary’s sudden death, John reluctantly agreed to his brother’s suggestion to correspond with a teacher in Ontario. John Harder and Mary Tiessen were married shortly thereafter. In 1953, the family moved to Vineland, where John and Mary established “Harder’s Dry Goods.”

The years in Vineland marked Harder’s expanding role in church life. In his local congregation, Vineland United Mennonite Church, he became Sunday School superintendent and lay minister. From 1964-1973 he was the first lay moderator of the Conference of the United Mennonite Churches of Ontario. In 1974, he was chairman of the hosting committee for the 1974 General Conference held in St. Catharines. He took particular satisfaction in pioneering inter-Mennonite cooperation, including helping to found the Mennonite Reporter national newspaper in 1971, and serving on its executive for many years. Harder also served as township councilor for six years in the 1960s.

Harder described himself as a man of “stolid character,” and is remembered by others for his business acumen, wise counsel, and dedication to family, church and community.

Harder, V. Peter. “A grateful tribute.” 24 December 1985 [copy of this funeral eulogy located at the Mennonite Archives of Ontario]