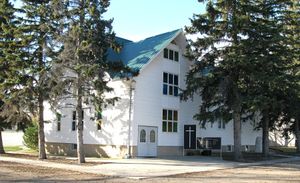 Hague Mennonite Church began services and formally organized in 1903 after Mennonites had moved to the area from southern Manitoba. The first building was occupied in 1911, with a subsequent building program in 1929. Peter Regier (Tiefengrund) is considered the founding leader of the group. The leaders during these early years were Nicolai Bahnmann, M. Galle, and W. Friesen. In 1929 a larger meeting house was built. By this time the congregation was more or less independent. The old building was eventually used by the Mennonite congregation in Neuanlage.

The congregation originated through colonization from rural Manitoba. Hague was formerly part of the Rosenort church group (Rosenorter Gemeinde). It became Hague Mennonite in 1962 when the Rosenort church group dissolved. The language of worship is English and German; the transition from German occurred in the 1970s. In 2007 the church had an average Sunday morning attendance of 80.

In March 2015 it was announced that Hague Mennonite Church had withdrawn from Mennonite Church Saskatchewan and had become an independent congregation. In September 2014, 85% of the congregation had voted to leave the conference. The church cited a number of areas of disagreement with the area conference, including same-sex marriage, women in ministry, the peace issue, and liberalism.