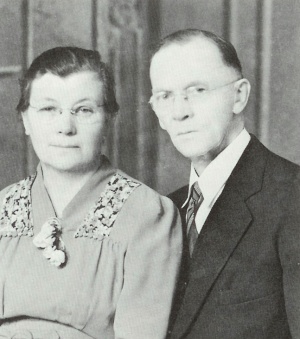 Soon after Nicolai's birth his family moved to Berdjansk where Nicolai spent his pre-teen years. The family then moved to Katharinorka in 1891. As a child Nicolai found his school studies a pleasure. Although the youngest in his class he was always a top student. During his teacher's examinations he developed acute eye problems and had to spend six weeks in a dark room. In spite of this setback he passed all his tests. However, his health was never very good. Bahnmann graduated from the Halbstadt Pedagogical College as a certified teacher. He also studied at the missionary seminary in Basel, Switzerland. While he was still a young man, the church recognized his ministry gifts. He preached his first sermon on Psalm 23 just prior to his 20th birthday. He was baptized on 3 June 1898 in Schoenfeld, South Russia, by Elder Toews.

The Bahnmann family immigrated to the United States in 1903, briefly residing with relatives in Mountain Lake, Minnesota. In the spring of 1904 the family resettled to Waldheim, Saskatchewan, where they took up a homestead. During these years Nicolai attended Bethel College, Kansas. In 1910 the Eigenheim, Saskatchewan congregation ordained him as an evangelist.

When Meta was 6 years old, her family migrated to Canada, arriving at Gretna, Manitoba on 6 July 1893. In 1894 the Regiers moved to Saskatchewan to homestead in Tiefengrund, Saskatchewan, then still part of the North West Territories. Meta was a hardy soul, offering much assistance to her parents in these pioneering conditions. On 4 June 1904 she was baptized by her father, Peter Regier, and joined the Rosenort Mennonite Church.

As a result of an accident in March 1910, Nicolai was in a coma for three days. This mishap sharpened his zeal for Christian ministry. However, the cold Saskatchewan climate aggravated his delicate health. On doctor's advice, the Bahnmanns moved to Pasadena, California, where in April 1912 Nicolai accepted a pastorate in a Methodist church. In August 1915 they returned to Hague. Nicolai received strong affirmation for his ministry and was ordained by his father-in-law, Elder Peter Regier, on 12 September 1915.

In 1922 Nicolai was invited to accept a pastorate in Pretty Prairie, Kansas, where he enjoyed six years of productive service. On 21 October 1922 he was ordained to eldership by Elder H. R. Voth.

Towards the end of the 1920s Mennonite communities were beginning to emerge in southwestern British Columbia (BC). The warmer climate along with numerous ministry opportunities became irresistible to the Bahnmanns, resulting in a move to BC. In short order, Nicolai became instrumental in founding the First Mennonite congregations in both Yarrow and Greendale.

From December 1934 to January 1936 Nicolai lived in Alberta to serve the Herrnhuter Brüdergemeine (Moravian Church). Between 1936 and 1938 Nicolai was active as an itinerant minister (Reiseprediger) among Saskatchewan Mennonites. He ministered in various Mennonite communities, including Waldheim, Hague, Osler, Warman, Aberdeen, and Swift Current. He also taught evening Bible courses in Swift Current where he was instrumental in founding the Swift Current Bible Institute.

By 1938 the expanding Mennonite congregations in British Columbia required additional pastoral care. In response Nicolai accepted an appointment as the provincial itinerant minister (Reiseprediger.) At the same time he began teaching Bible courses during the winter months, and subsequently founded the Coghlan Bible School in 1939, which later became the Bethel Bible Institute after relocating to Clearbrook, BC. Owing to his leadership gifts, Bahnmann was elected chairman of the BC Mennonite Church provincial conventions in 1939 and 1940. He was known to be an excellent preacher, endowed with a near-photographic memory. In 1944 the Coghlan (now Bethel) Mennonite church called him to be their elder.

By 1942 Nicolai experienced ministry burnout. For a change of pace he took up employment as a night orderly in the Vancouver General Hospital. Nicolai died 4 February 1945 in Vancouver, BC.

Meta's zeal and giftedness was appreciated throughout the Conference, especially in espousing women's ministry and missions. In 1939 she gave leadership to forming the BC Women In Mission [Frauenkonferenz], an organization she led for 20 years.

After her husband died, Meta joined the Mountainview Mennonite Church in Vancouver. Characteristically, she soon became active in various local church ministries, and particularly in home and hospital visitations. By 1970 Meta's failing health resulted in a relocation to the Valhaven Rest Home in Abbotsford. She died in Abbotsford on 26 April 1975.

Throughout their lives Nicolai and Meta Bahnmann were spiritual pioneers among Mennonites in Saskatchewan and British Columbia.

Peters, Gerhard I. Remember Our Leaders: Conference of Mennonites in Canada. Clearbrook, BC: The Mennonite Historical Society of British Columbia, 1982.