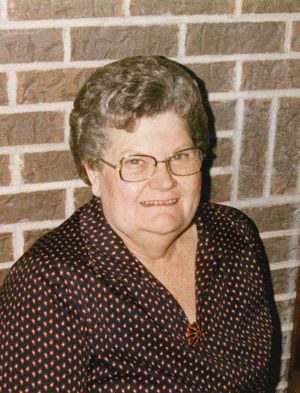 Sue attended high school and Bible school in Corn, Oklahoma. She continued her studies at Tabor College in Hillsboro, Kansas, followed by Southwestern State Teachers College in Weatherford, Oklahoma, where she graduated with a BSc in Home Economics in 1949. She did graduate work in the summers at San Jose State College in San Jose, California, finishing at Kansas State College, Manhattan, Kansas, with a MSc in Home Economics in 1956. She took one post-graduate course at Harvard University.

Sue Goerzen was very involved in the Harrow Mennonite Church on various committees and as deacon, teaching the youth Sunday School class for 28 years. She was the first woman to speak from the pulpit in many Mennonite churches in Ontario. She sat on the Conrad Grebel University College Board from 1992 until 1999. For many years Sue was the parliamentarian for the Conference of United Mennonite Churches in Ontario. She was involved in the Education and Family Life Committees for the Ontario Conference. Sue also helped to establish the Windsor Mennonite Fellowship.

Amid the racial tensions of the late 1960s, Sue taught mostly African American students in Detroit. In April 1968, on the day that Martin Luther King, Jr. was killed, a student mob came to attack the white teachers at the school where she was teaching. When they came to her classroom, a group of her male students formed a circle around her, drew switchblades to challenge the mob, and then they escorted her to her car. That day, three white teachers were killed and seven were injured. Later, when the violence had settled and Sue returned to school, she asked her students why they had protected her. Their answer, "Because you are our friend." She then used the opportunity to discuss the outcome of the violence in the school in relation to the words of Martin Luther King, Jr.

Sue was an educator, mentor and visionary. She had a tremendous capacity to listen to others, and to see the good in people. For Sue, loving God meant loving others.