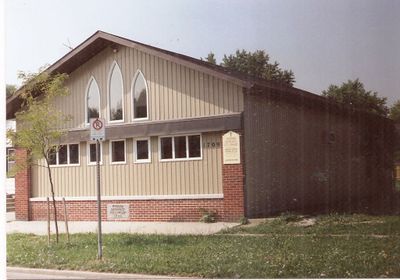 The Windsor Mennonite Fellowship was the second attempt to establish a Mennonite church in Windsor, Ontario. The first congregation met from 1926 until the mid-40s but never achieved autonomous status, remaining a satellite of the Essex County United Mennonite Church centered in Leamington.

The second attempt began as a church-planting project of the Conference of United Mennonite Churches of Ontario. Henry Paetkau, pastor of the Harrow United Mennonite Church, was appointed to lead this project. Weeknight Bible studies involving interested people were held in the home of Henry and Mary Janzen; these went from September 1981 to February 1983. On 27 November 1983 Sunday evening worship services began in the basement chapel of Trinity United Church. These services continued until 30 December 1984; on 6 January 1985, the services moved to Sunday mornings and the meeting place shifted to the Remington Booster Community Center. Since Paetkau then had to withdraw as pastor, Henry P. Epp of Leamington, newly-retired pastor of the St. Catharines United Mennonite Church, assumed pastoral leadership on an interim basis. The move to the community center also led to the addition of a Sunday School for all ages.

In 1985 the congregation adopted a constitution, achieved registration as a charitable institution, and on 27 October celebrated "Membership Sunday" at which time 13 full members and 4 associate members formally joined the Fellowship. On 1 August 1985 Jacob W. Dyck was hired as pastor, and he served until 31 July 1987. During his tenure, the first baptism (Cathy Janzen) was held on 7 June 1987.

In 1988 Arthur P. Boers took on the position of pastor. During his term of service the Windsor Mennonite Fellowship was accepted as a member church in the Mennonite Conference of Eastern Canada (MCEC), and its meeting place changed twice -- first, to the AKO Community Centre and in 1990 to its own building at 1709 George Avenue. Here an abandoned laundromat was transformed into a meetinghouse, with financial assistance from MCEC, the Tenth Man Program of the General Conference Mennonite Church, and volunteer labor from the Leamington and Harrow churches. Within two years, an education wing was also added.

Erwin Wiens, Windsor's longest-serving pastor in the congregation's early life, gave leadership from September 1993 until July 2002. He and his wife, Marian, then left to work with Mennonite Church Canada Witness in South Korea.

At the annual meeting in January, 2003, the congregation revised its constitution, changing from a traditional church council/ministry council format to an eldership/trustee model.

Conference of the United Mennonite Churches of Ontario. Yearbooks 1984-87.