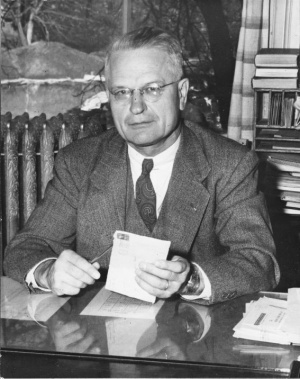 He was born 12 October 1894 in Mountain Lake, Minnesota, the son of Herman J. and Aganetha (Becker) Fast. A graduate of Bethel College and Witmarsum Seminary, he received his PhD degree from Hartford Theological Seminary in 1936, having done research on nonresistance in the synoptic gospels, a work later published as Jesus and Human Conflict (Scottdale, 1959).

In 1936, the General Conference Mennonite Church called him to visit its congregations, an assignment that covered Mexico, Paraguay, and Brazil, as well as the United States and Canada. In 1940, he was on the peace church team that worked with the United States government to develop Civilian Public Service (CPS), an alternative for World War II conscientious objectors. He thus secured rights not available to him in 1918, when he was drafted into the army and endured abuse to secure work in the base hospital at Fort Riley, KS. He directed the CPS camps assigned to the Mennonite Central Committee (MCC) until 1943 when he became professor of Bible at Bethel College, a post he held for 17 years.

After World War II, he promoted the movement that founded a number of Mennonite mental health centers as well as Mennonite Mental Health Services. He was MCC's vice-chairman (1943-1960) and, in 1951, led its relief work in Europe. He promoted voluntary service and a ministry to the aging both in MCC and as a member of the Commission on Home Ministries (GCM). From 1941 to 1968, he helped the General Conference Mennonite Church rewrite its constitution and refine its organization.

"Henry A. Fast" as told to Maynard Shelly, in Something Meaningful for God: The Stories of Some Who served with MCC, ed. Cornelius J. Dyck Scottdale, PA: Herald Press,1981: 32-70.

Bartel, Barry C.  "Henry A. Fast: A Man with a Purpose." A research paper with a bibliography of writings by Fast 1983, copy at Mennonite Library and Archives (North Newton, Kansas, USA).

Fast, H. A.  C.P.S.—Past and Future. No date indicated, a 4-page Manuscript, Mennonite Library and Archives).