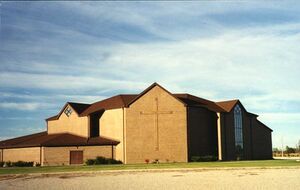 On 5 February 1895, a group of 80 members and their families broke from the mother congregation, Hoffnungsfeld Church, and formed the Hoffnungsfeld–Eden Church. Both congregations had used the same church building 4.5 miles from Moundridge, Kansas, in rural McPherson County, until 1898 when the Hoffnungsfeld–Eden group dedicated their new church edifice in the section to the west (SE-24-21S-3W). In the years between the group’s 1874 arrival in America and the time of separation, the group had divided between those who wanted to remain conservative in their beliefs and those who were more progressive in their thinking. One issue causing division was the education of their youth: was schooling through eighth grade preferred or was it okay to send them to high school and even on to college? Other factors, such as the death of Elder Jacob Stucky, also added to the disagreements within the group which ended up in the formation of two congregations.

Peter M. Krehbiel, Peter Stucky, and C. J. Goering were the first leaders of Hoffnungsfeld–Eden. This new congregation joined the Western District Conference in 1895 and the General Conference of Mennonite Churches in 1896.

The congregation was blessed with steady growth and on 14 September 1924 dedicated a new and much larger building less than two miles north. At this time the name “Hoffnungsfeld” was dropped, and the name “Eden Mennonite Church” adopted. This building was enlarged and remodeled in 1949. Later the church maintained an Activity Center, which included a gym, kitchen, and meeting rooms, located one-half mile south of the church site, utilizing the facilities originally designed for a four-teacher rural school.

The German language was the most obvious sign of Eden remaining separate from the larger Moundridge community. By the 1930s English was making its way into the church. At the annual meeting in 1931, the congregation passed a resolution “that we have an English worship service once a month after the S.S. hour.” The shift to English was gradual, occurring over a span of years. In 1938 and 1940 the congregation purchased English hymnals. In 1944, the church authorized three English worship services a month.

During this time the role of women in the church was also changing. Women were allowed to hold some offices and to teach Sunday school, but they were constitutionally barred from higher offices in the church and were not allowed to attend or vote at annual meetings. In October 1951, the deacons agreed to call a meeting “to work out the proposed change of the constitution giving the women the right to vote.” This revision was voted down. At the end of 1956, the church began to completely revise the constitution. In the final version, adopted in 1958, all mention of gender was dropped. In this way, women were given all rights and duties that previously had been reserved for men, including voting and holding office.

With Peter Stucky’s passing in 1915 and Peter M. Krehbiel wishing to retire, Eden Church elected Philip A. Wedel as minister in 1925. Rev. Wedel served until 1936 when he accepted the call of another congregation. In 1937 Eden Church asked Walter A. Gering to be its pastor, and he served until 1950.

On a cold and windy winter night, 25 January 1988, the large white building of Eden Mennonite Church burned to the ground. For two years, as decisions and construction progressed, the congregation met in the Moundridge High School Auditorium and continued to use the church’s offices at 109 East Hirschler Street and Eden’s Activity Center. On 15 March 1990 the congregation celebrated the dedication of the newly completed church building on the same site.

The church’s mission and outreach programs have been important. Locally it has supported Pine Village and Associated Ministries of Moundridge, which includes Angel’s Attic, Cradle to Crayons, Moundridge Food Pantry, Moundridge Senior Center, and other programs. Through the wider church Eden has supported the ministries of Mennonite Central Committee (including the Kansas Mennonite Relief Sale), Mennonite Disaster Service, and Mennonite Church USA along with Western District Conference. For 25 years, Eden sponsored a weekly radio broadcast on the McPherson radio station.

Waltner, Jerome K. This do in remembrance of me: history of Eden Mennonite Church. Newton, Kan.: Wordsworth, 1995.

Eden Mennonite Church (GCM), located west of Moundridge, Kansas, was organized in 1895 as the Hoffnungsfeld-Eden Mennonite Church; this was changed in 1924 to the present name. The congregation joined the Western District Conference in 1895 and the General Conference Mennonite Church in 1896. The first church was erected in 1898, replaced in 1924 by the present building, which was remodeled in 1949. Ministers who have served the church are Peter M. Krehbiel, Peter Stucky, C. J. Goering, Phil Wedel, and Walter Gering, the latter serving as elder 1937-50. C. J. Goering served as elder 1901-37. The congregation is of Swiss background, having immigrated to the present location in 1874 from Volhynia, Russia, where they were a part of four main communities formed by settlers from France, the Palatinate, and Switzerland. The most common names are Goering, Kaufman, Krehbiel, Schräg, Stucky, Waltner, Wedel, and Zerger. The membership in 1955 was 777. Peter J. Dyck accepted the call as pastor of the church in 1950.