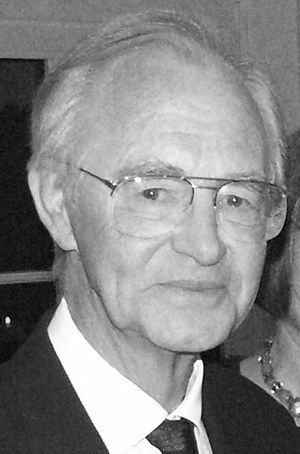 Heinold Fast: Reformation historian, pastor and denominational leader, was born 17 March 1929 in Emden, Germany to Abraham Fast (2 January 1886-15 September 1962) and Luise Händiges Fast (16 September 1887-28 March 1977). Abraham Fast, a Mennonite theologian, had come from a Mennonite settlement in Molotschna, Ukraine. Heinold was the youngest of four children. On 23 August 1963 he married Frauke Meyer; they had a son and a daughter. He died on 22 November 2015 in Emden after a long illness.

He spent his school years in Leer and, following his university entrance exam, pursued theological studies at Bethel College, in North Newton, Kansas, and then at the universities of Göttingen and Heidelberg. In 1957 he completed his dissertation on Heinrich Bullinger und die Täufer with the renowned Reformation historian Heinrich Bornkamm at Heidelberg. In the same year, Fast assumed the pastorate long held by his father in the northwest German Mennonite congregations of Emden, Leer, Norden, and Gronau (Westphalia). There he served until his retirement in 1992.

With unusual sensitivity, Fast successfully navigated between his father's preaching style, oriented to German idealism, and modern theology as it was taught in German universities in the post-war years. He also brought the congregations in East Frisia into closer fellowship with other congregations in the Union of German Mennonite Congregations (Vereinigung der deutschen Mennonitengemeinden). For a quarter of a century he served in the leadership of the Union, including 12 years as its chairperson. Thanks to his diplomatic gifts, Mennonite congregations in both South and North Germany gradually drew closer to each other. Following his time in office, these groups joined together in the Task Force of German Mennonite Churches (Arbeitsgemeinschaft Mennonitischer Gemeinden in Deutschland).

Fast also managed to open doors among German Mennonites to the Anabaptist peace witness, particularly as it was framed by North American Mennonites in the Puidoux Theological Conferences (1955-1962) with representatives of other peace churches and the Protestant state churches. While Fast was in Switzerland doing his dissertation research he became acquainted with John Howard Yoder, the leading peace theologian among North American Mennonites, and adopted the interpretation of Anabaptism that found its center in the pacifistic "politics of Jesus." Along these lines he represented Mennonites at the Prague Peace Conference in 1961 and volunteered as secretary of the Puidoux Conferences between 1965 and 1972. A collection of various essays on the theme of peace theology, Beiträge zu einer Friedenstheologie (1982), resulted from this work. From 1972 to 1979, Fast was a member of the executive committee of the Mennonite World Conference.

Heinold Fast’s research on Anabaptism was recognized far beyond the circle of German Mennonites, especially with a collection of sources, Der Linke Flügel der Reformation (1962). Fast reconfigured the typology of the Radical Reformation scene so that Anabaptists (Täufer), consistent with the direction of classic Mennonite scholarship, were so sharply distinguished from the anarchists (Schwärmer) that even Melchior Hoffman, the founder of Anabaptism in the Low Countries, was excluded from Anabaptist ranks. Fast's collection included significant texts from each radical group in modernized texts. Fast secured an enduring reputation with his critical edition of the Quellen zur Geschichte der Täufer in der Ostschweiz (1973) and the so-called Kunstbuch—a text compiled by the group associated with Pilgram Marpeck and reflective of the spiritual orientation of its editor, Jörg Probst Maler—which he discovered along with J. F Gerhard Goerters. Both these collections of historical sources, rooted in his exemplary research and editing skills, are of enduring value. Since Fast himself was not able to finish the edition of the Kunstbuch, Gottfried Seebaß and Martin Rothkegel brought the project to completion in 2010.

In his active years, Heinold Fast followed closely the evolution of Anabaptist research, serving as co-editor of the Mennonitische Geschichtsblätter (1970-1992) and as chairperson of the Mennonitischer Geschichtsverein (1974-1992), thereby ensuring that Mennonite interest in their history would be informed regularly by the latest research findings. To this end, he took a leadership role with the Täuferaktenkommission des Vereins für Reformationsgeschichte and consistently supported the course of research with his own contributions. He also demonstrated an understanding for those who heralded a fundamental revision of Anabaptist scholarship and who no longer spoke of monogenesis but referred to Anabaptists beginnings as being polygenetic. He accompanied these revisionists with constructive criticism, pointing out the permeability that existed within individual Anabaptist movements.

Nonetheless, Fast himself continued to seek to figure out an essential core of what the Anabaptists were actually pursuing, regardless of the multiple and heterogeneous ways they often manifested themselves. Noteworthy is his analysis in Reformation durch Provokation (1975) of "preaching disruptions" (Predigtstörungen) through which early Anabaptists paradoxically brought attention to the path of peace. Even grander is his summation of early Anabaptist theology in the article Die Wahrheit wird euch freimachen, also published in 1975.

For many of his later years Heinold Fast was beyond our reach. Having lost his capacity for memory he lived in a nursing home in Holtland bei Leer (East Frisia) near Emden. He had drawn his work from the remembrance of Anabaptist men and women at the dawn of the Reformation, people who themselves had staked their lives on seeking new ways to find significance for their living through the remembrance of the death of Jesus Christ on the cross at Golgotha. Remembrance became a very symbol of Fast's life.