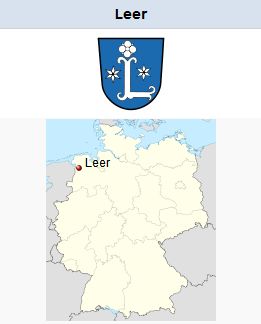 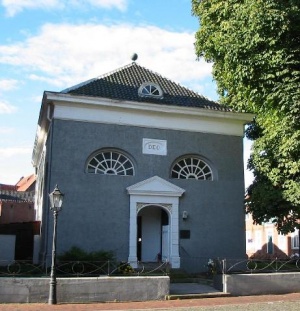 Leer, a town (pop. 34,000 in 2005) in East Friesland, in the province of Hannover, Germany (coordinates: 53.230833, 7.452778 [53° 13′ 51″ N, 7° 27′ 10″ E]), the seat of a Mennonite church which originated in the early years of the Anabaptist movement. Its founders were probably refugees from Holland and Flanders.  It is known that the martyr Elisabeth found temporary asylum here. The family names van Hoorn and Bavink occur in the earliest period. Other Mennonite family names were Alringh, Lulofs, Vissering, Zytsama, and later also Rahusen. Covering the years 1635-1768 there is a Grootboek (financial record) which gives some information on the history of the period. The congregation did not attract much outside attention. It had only a lay minister; for communion, which was called "unity" after 1 Corinthians 10, and baptism, the elder of Emden was called in. During the time of the difficulty with the government concerning letters of protection, etc., nothing is heard of the Mennonites at Leer, perhaps because they had nothing to be extorted from them.

The congregation was said to be Flemish, and as such presumably represented the moderately strict wing in church discipline. Besides this group, there was in Leer also a Groningen Old Flemish or Ukowallist congregation, concerning whose rise and historical development there is no information, but which was in existence by 1660. The two groups united on 24 August 1767. The Old Flemish group had a church at the Kolleweg; this chapel, called "De Schollenberg," which had been the property of the deacon David Joosten (Vissering) was purchased in 1771. It was razed in 1825, and a new church erected with a pleasant garden on the Wörde. A wing was added to accommodate a sexton's apartment and rooms for the church council and for catechism. Two years later an organ was installed. Leer was probably one of the first German Mennonite churches to have an organ. For some years it accompanied only Dutch singing. In fact the services were conducted in Dutch until the 1870s. Untrained preachers of the Old Flemish congregation were Lubbert Alberts, ca. 1680, Harmen Geerts, ca. 1685, Jan Hendriks, 1713-ca. 1740, Jan Warners, 1721-ca. 1742, and Harmen Berentsz Alringh, 1742-ca. 1758.

After 1920 the pulpit was not filled, and the congregation affiliated with the Mennonite church at Emden, A. Fast serving as pastor here as well as at Emden. After the destruction of Emden in World War II, Pastor Fast made his residence in Leer for a time. The Leer church was incorporated in 1908 and is a member of the Vereinigung. Earlier it had become a member of the Dutch Algemene Doopsgezinde Sociëteit and other Dutch Mennonite associations, and drew its preachers largely from Holland.