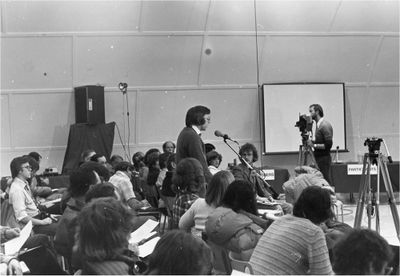 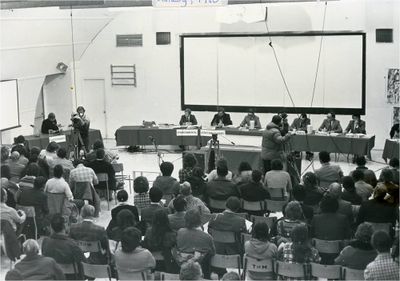 Warman and district, hearings at Martensville, Saskatchewan in January 1980; note the seven member panel table is centre but the "participants" table is placed on the far left to symbolically down play its importance.
Photo: Jake Buhler.

In the 1970s the Canadian province of Saskatchewan through its Crown Corporation SEDCO (Saskatchewan Economic Development Corporation) was interested in adding value to the uranium ore mined in the province’s north. It convinced Eldorado Nuclear Ltd. to plan for the construction of a uranium refinery in the province. Eldorado under its Chief Executive Officer, Nicholas M. Ediger, chose nine quarter sections, the rich farmland in the Saskatchewan Rural Municipality of Corman Park, centred at 52.30°N 106.51°W, a place 5 km. southeast of the town of Warman, Saskatchewan. This site was chosen because it was close to transportation, qualified labour, education and research resources and an abundant supply of water and energy. The refinery project was to annually transform mined uranium concentrates, yellow cake, from mines in northern Saskatchewan into 9,000 tonnes of uranium hexafluoride (UF6) which could then be exported.

The Canadian public in the 1970s began to be seriously concerned over environmental issues and to make their concerns known to governments. The Berger Inquiry 1974-78 into the Mackenzie Valley Pipeline in the Northwest Territories extended its enquiry scope to include socio-economic, community and native interests. This began a process of expanding the boundaries of assessments to investigate not only the physical environment but also the human environment of the community affected.

In 1976 SEDCO optioned land purchases in Corman Park for a uranium refinery. These lands were in the original Hague-Osler Mennonite Reserve. Proposing a uranium refinery resulted in local people organizing opposition and forming the Warman and District Concerned Citizens Group (WDCCG) which by 1980 held 500 members many who were Mennonite. It's leaders were Ernie Hildebrand and Edgar Epp. While Eldorado sought support by concentrating efforts through local, provincial and federal government leaders the WDCCG organized ordinary local people to express their opposition. Local Mennonites who hold and live a profound belief in peace particularly objected vigorously to the refining of uranium, for one of its primary use is for manufacturing atomic and hydrogen bombs. There was also strong opposition to the use of very productive farm land to manufacture chemicals that can pollute and poison.

In October 1979 the Eldorado Nuclear Ltd. Environmental Assessment Panel was created to asses all matters related to the proposed refinery project. The seven member panel chaired by John Klenavic received, studied and investigated Eldorado’s Environmental Impact Statement. Further it received reviews and comments from the public, particularly from people who lived in the vicinity of the proposed project and from local, provincial and federal government agencies. The Panel quickly realized that the majority of the people in the vicinity were Mennonite. In October 1979 the Panel invited David Schroeder of Canadian Mennonite Bible College to address them. This was to help in understanding the project setting and to learn more about the Mennonite people in the immediate area.

Between 8 and 24 January 1980 public hearings were held by the Panel in the towns of Warman and Martensville. These public meetings demonstrated strong local interest in the project with 336 people appearing before the Panel which also received 201 written submissions plus a number of signed petitions and numerous technical reports. Those addressing the panel in opposition included ordinary farmers, teachers, workers and church leaders like Ältester John D. Reddekopp of Saskatchewan Bergthaler Church. They told of the negative impact the refinery would have on them and their community.

The Panel found Eldorado’s Environmental Impact Statement severely deficient with respect to the project’s social consequences on the distinctive community that clearly existed in the area. This distinctive community was identified by the Panel as “uniquely associated and identified with the Mennonite ethnic and religious community; to the east and across the river it is the Hutterite Riverview Colony.”

Assessing the projects impact on the human environment of the community affected, the Panel reported that adverse social impacts are too important to permit endorsement without a full informed assessment of these issues.

One fourth of all presentations were by Mennonites who wanted to preserve the area unchanged. These and presentations by others resulted in there being three fourths of all presentations in opposition to the refinery. The Riverview Hutterite Colony supported the project but indicated that it would have no impact on them at all. Urban Mennonites offered no support during the hearings. It was rural Mennonites that supplied the opposition. Mennonites felt that the refinery threatened their ethnic community and religious practices and beliefs. The opposition was focused on radiation harming human health, on misuse of agricultural land, and the connection between uranium and nuclear weapons. Further there was considerable mistrust of Eldorado in spite of the fact that its president, Ediger, had a Mennonite background.

After the hearings and evaluating the written submissions the Environmental Assessment Panel concluded that while “the impact on the physical environment would be minimal” its concluding recommendation was:

The Panel’s review has led to the conclusion that because of the uncertainty with respect to social impact, it cannot endorse the site selected by Eldorado for the proposed refinery.

Eldorado accepted the Panel decision and abandoned the project entirely.

In 1983 in the place of Warman, Saskatchewan, Eldorado Nuclear constructed its new uranium refinery in the province of Ontario just west of the town of Blind River.

Buhler, Jake, and Nettie Wiebe. “Eldorado Nuclear and the Farmers of Warman, Saskatchewan” Paper presented at A People of Diversity: Mennonites in Canada Since 1970 Conference, 16 November 2018, University of Winnipeg.

McConnell, Gail A. The Warman Story: The Refinery That Never Was. Winnipeg, Manitoba, Mennonite Central Committee Canada,1989. A comprehensive analyses of the event. Available in full electronic text at: https://archive.org/details/thewarmanstorytherefinerythatneverwasocr/mode/2up

[Warman and District Concerned Citizens Group] Why people say no to a uranium refinery at Warman, Saskatchewan. Regina, Saskatchewan, Regina Group for a Non-Nuclear Society, 1980.