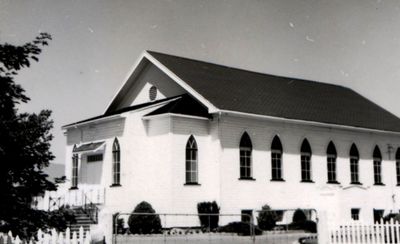 Mennonites began moving to the East Chilliwack area from the Canadian prairies in the early 1940s. On 4 April 1945 a meeting was held at the home of Heinrich Bergman to organize church services. Services began shortly thereafter in the Lotbiniere School building on Prest Road, which was later purchased in 1947 and remodeled as a church. The church formally organized on 28 December 1945 under the name Westheimer Mennonitengemeinde with 32 charter services. William L. Rempel and Gerhard Loewen were the first ministers. Rapid growth was experienced throughout the 1940s as through the continued movement of people from the prairies as well as through immigration from Europe after World War II.

Within a few years two distinct groups were evident within the congregation. Rempel, educated at Prairie Bible Institute, and Gerhard Loewen, an older minister from Russia, represented two different theological camps, with Rempel emphasizing conversion and life style issues such as smoking. In May 1947 a group under Loewen’s leadership organized the First Mennonite Church in downtown Chilliwack. The Westheimer group then became known as East Chilliwack Mennonite Church (East Chilliwack Mennoniten Gemeinde).

The greater emphasis on evangelism also led to differences within the provincial conference (Conference of United Mennonite Churches of British Columbia) and the congregation voted to leave the conference in May 1954 along with West Abbotsford Mennonite. East Chilliwack rejoined the conference on 20 February 1956.

The congregation were able to occupy their own building at 333 Prest Road in 1948, which was expanded in 1957. In 1961 the congregation moved from their location on Prest Road to a new church constructed at 46551 Chilliwack Central Road, at which time the name of the church was changed to Eden Mennonite Church.

Missions has been an important emphasis in the church, and in its first 45 years 22 members had worked under various missions boards. In 1976 the congregation formed Eden Mennonite Society to look after its elderly and built Redwood Manor.

In the early 1990s Eden experienced a severe congregational conflict due to differences over worship style (based on styles of music) and theological underpinnings within its leadership. As a result the church felt the effects of members leaving the congregation slowly over time. Those that remained within the church continue to promote unity in diversity, as typified by a balanced approach in worship styles, blending both hymns and contemporary songs into an average Sunday morning service.

The German speaking segment of the congregation slowly continues to decline, though there still remains to be one German speaking Bible study group. The leaders of this group have always been gracious in enabling the English focus of the church and have been intentional about not making the language difference into a divisive issue. In the mid-1990s the German Sunday morning service was turned into a German Sunday school before eventually becoming a Wednesday bible study group.

In the last 15 years, the church has been intentionally generational in its discipleship focus, believing that each generation can profoundly help others in their journey with Christ. This approach has also fostered congregational unity and maturity. Along with this shift towards discipleship, Eden has also been positively influenced by a missional approach to church life (as endorsed by Mennonite Church Canada), encouraging its members to be involved in being the salt and light in their own communities locally.

In 2012, Eden was marked by an inter-generational focus, evidenced by its demographics where the two largest groups within the congregation were the 0-12 year old group and the 75+ year old group. The church had continued to operate with a congregational based polity and had seen much fruit in this style of leadership.

Leaders from within the congregation have also provided leadership in the provincial conference, with pastors Henry A. Wiens, George Groening and Dick Rempel all serving as conference chairman, along with George Nachtigal and Wilmer Tessman.

Churches in Profile. Clearbrook, BC: Conference of Mennonites in British Columbia, 1978: 46-50.