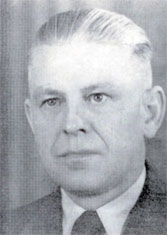 Valentine Nickel received his elementary education in Rosthern, Saskatchewan. He moved with his family to Renata, British Columbia, but returned to Drake, Saskatchewan after a few years. He attended the German-English Academy in Rosthern (now Rosthern Junior College). Valentine completed teacher training in Saskatoon and taught in Perdue, Saskatchewan from 1926 to 1928 and Osler, Saskatchewan from 1928 to 1929. The family then settled in the teacherage in Wymark, Saskatchewan, where he taught from 1929 until 1962, with a break for health reasons in 1937-1938 (he had fallen into a Canadian Pacific Railway well while drawing water for irrigation). During this time he also taught at Swift Current Bible Institute. While there, he began a preaching ministry in the Emmaus Mennonite Church primarily at Wymark but also serving at the other scattered Emmaus congregations. He was elected as their minister 10 June 1938 and ordained 14 August of that year. On 20 May 1945 he was ordained as an elder at the Zion Mennonite Church in Swift Current. In 1962 he accepted the call to become the leading minister of Eden Mennonite Church in Chilliwack, serving from November 1962 until December 1964.

In 1943 Rose also began to teach in Wymark and continued until 1968 even after the family move to British Columbia. After that she taught at the Mission School on the Hopi Indian Reserve in Arizona until 1973.

Valentine and his wife Rose would sing duets while conducting church services. He was well known for his public speaking abilities and his ability to deliver a sermon without referring to notes.

Peters, Gerhard I. Remember Our Leaders: Conference of Mennonites in Canada. Clearbrook, BC: The Mennonite Historical Society of British Columbia, 1982.