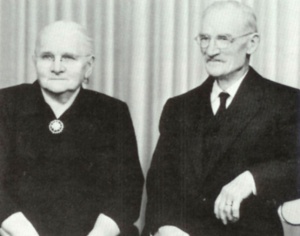 Gerhard was baptized in 1894 and married Katharina that same year. In 1910 they moved to Voronezk, Russia, where in 1922 he was elected to the ministry. The family migrated to Canada in 1926, settling on a farm near Yorkton, Saskatchewan. In 1931 he was called the by Osler Mennonite Church to serve as a minister, where he served until 1936.

The family moved to British Columbia in 1936 and Gerhard became the minister of the Greendale First Mennonite Church. He left the church at Greendale to help the newly organized Westheimer Mennoniten Gemeinde (later East Chilliwack and now Eden Mennonite Church) that had gathered for worship in East Chilliwack. By 1947 it was apparent that a division had arisen in the congregation between those who emphasized a public testimony of one's conversion experience and those who considered a specific conversion experience and public testimony of it as too personal. Loewen left with the latter group to organize the Chilliwack First Mennonite Church on 18 May 1947. He retired due to illness in November 1948.

Peters, Gerhard. Remember Our Leaders: Conference of Mennonites in Canada 1902-1977. Clearbrook, BC: The Mennonite Historical Society of British Columbia, 1982.