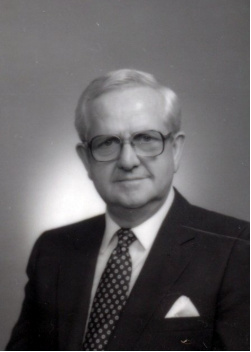 Peter Dueck immigrated to Canada from Russia in 1926. He grew up in Boissevain, Manitoba, and moved to the Fraser Valley with his family in 1946.

Peter also developed several other major businesses: Dueck Homes, which produced prefabricated homes sold throughout BC; and Dueck Industries, which manufactured windows, sold throughout Canada. These businesses were sold in 1964. In 1967 he purchased Power Machinery, which manufactured the Canadian Chainsaw and exported them around the globe. That business was expanded and sold to SKIL Power Tools Corporation in 1969.

Peter was also involved in many major real estate development projects in the Fraser Valley and Southwest United States. He assembled and sold the land in Abbotsford on which the 500,000 square foot-Seven Oaks Mall was built in 1972. In 1980, he developed West Oaks Mall, adjacent to Seven Oaks Mall.

He purchased office buildings in Houston, Texas and Phoenix, Arizona in order to remodel and lease. He developed high-end residential real estate in Scottsdale, Arizona. In Colorado, he developed the Aurora Centertech Business Park, which was home to high technology buildings for classified data centers, as well as high-density residential, retail, and office and industrial buildings. His clients included Hughes Aircraft, TRW Automotive, Lockheed and Raytheon.

Peter dedicated his life to sharing his Christian faith with family, friends and colleagues. He took on the leadership of Campus Crusade for Christ in Canada (now Power to Change Ministries), beginning in 1972, and served 20 years on the board of Briercrest College and Seminary in Saskatchewan. He served on the boards of Trinity Western University and Columbia Bible College. He was a long-time supporter of various other Christian ministries across Canada and abroad.

Peter Dueck retired to Vancouver with Lena in 1998. Peter was a man who influenced many through his business and his faith. He had the courage to do what others believed could not be done, and had the ability to see past the immediate with a vision of the future. He was a generous man with his time and wealth and expected nothing in return.