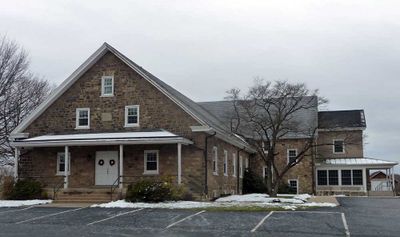 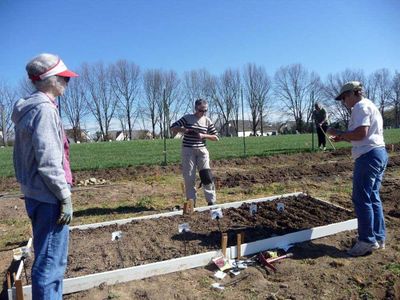 The community garden in 2012.
Photo by Lois Myers.

The Doylestown congregation was apparently started by immigrants or children of immigrants who had earlier settled in the Salford and Towamencin areas of Montgomery County, Pennsylvania, and moved into central Bucks County by the 1760s. By 1772 they had purchased a seven acre site, receiving a deed in 1774. Trustees at the time had names of Rohr, Haldeman, Switzer and Kulp. Some early graves in the cemetery were dated 1779, 1781, 1788, 1791 and 1792. A log meeting house was constructed, followed by a stone meetinghouse in 1808, with an addition 1840. In 1900 this meetinghouse was razed and a new one built. An addition to this building was constructed in 1960 and another small section added in 2006 to accommodate an elevator and a pleasant foyer.

At first, the congregation had no ordained minister, being served in rotation with the congregations at Blooming Glen and Deep Run. John Kephart was a Revolutionary War soldier who had campaigned in Bucks County and married a Mennonite girl, later uniting with the congregation. He became the first resident minister, ordained in 1806. By 1818 another minister, Jacob Kulp, was ordained, but moved to Ohio 13 years later, at which time Abraham Godshalk was ordained. Some years later, Godshalk wrote a book, A Description of the New Creature, published in 1838 in both German and English, to encourage genuine Christian growth at a time when some Evangelicals were preaching ideas of immediate salvation and perfection. Following Godshalk, ministers were ordained from among the congregation until 1970, when Roy Bucher of Metamora, Illinois was called as the first salaried minister.

Sunday School was started in 1882 and continued each summer until about 1892, then re-established in 1894 as year-long Sunday School and continued ever since. The congregation was progressive and over the years established other programs, including Summer Bible School, and for a time, a mission congregation at Trevose, Pennsylvania. In the first decade of the 21st century, the congregation was host to Karen’s Place, a coffee house with Christian music performances; Tuesday Night Teens, a youth ministry; Sister Circle, a mothers’ morning out; Mennonite Women, producing quilts and comforters for relief; a church library; and an active prayer ministry. In 2011 a community garden on the church property was organized as an outreach of the congregation.

Some notable people with roots in the Doylestown Mennonite Church include John and Catharine Leatherman, pioneer missionaries in Africa; Glen and Elizabeth Nyce Good, missionaries in France; and Dr. Christopher and Lois Gross Leuz, plastic surgeon and nurse, who served in Taiwan, among other places. Closer to home were Norman Derstine, long-time Mennonite Hour speaker, church planter Henry Swartley, historian Leonard Gross, and Willard Swartley, seminary teacher and writer. Paul and Betty Moyer were widely known for their role in the establishment and management of Spruce Lake Retreat in the Pocono Mountains. Silas Graybill started a bookstore in Souderton, Pennsylvania which eventually became a branch of Mennonite Publishing House’s Provident Bookstores, and he continued with a Christian bookstore in Doylestown during his years as one of the congregation's pastors. Others have served the church in Voluntary Service and other assignments under the agencies now known as Mennonite Mission Network and Eastern Mennonite Missions.

The congregation experienced a noticeable decline in membership and participation beginning around 1990. Some reasons were conflicts, youth leaving the area, declining loyalties, and other struggles, including changing to a mixture of traditional and contemporary worship styles. During the interim ministry of Michael Meneses in 1999-2000, some new structures were set in place and decisions made with an eye to the future. In 2010 pastor Randy Heacock and the Ministry Leadership Team proposed launching a new ministry for a period of three years to lead the congregation in new directions under the guidance of the Holy Spirit. This was called the Missional Experiment, and in 2012 KrisAnne Swartley was licensed to minister with persons inside and outside the congregation who wanted to make new connections in their communities and neighborhoods.

In 2012, the congregation was led by a leadership team consisting of the pastors and chairpersons working in areas of stewardship, service, worship, discipleship, outreach and fellowship. A prayer minister was commissioned to lead out in the prayer life of the congregation and a worship leader was in charge of a worship team providing music leadership. A congregational care team served those needing a sympathetic presence in times of stress.

Doylestown Mennonite Church, located northwest of Doylestown, Pennsylvania, is affiliated with the Franconia Mennonite Conference (MC USA). Land for the building was bought in 1772, and the first building, a log structure, was erected about three or four years later. This log church building was displaced by a stone structure in 1808, which in turn was enlarged in 1840. In 1900 this enlarged stone building was razed and in its place another building was erected. Prior to 1806 the services were conducted by the ministers in the Deep Run-"Perkasie" (Blooming Glen) - "New Britain" (Doylestown) circuit, but in 1806 a resident minister was ordained, John Kephart, a Revolutionary War soldier who had married a Mennonite girl and joined the congregation. He was followed by the following ministers: Jacob Kulp (who moved to Ohio in 1831), Abraham Godshalk, John K. Gross, David L. Gehman, Bishop A. O. Histand, Mahlon Gross, Bishop Joseph L. Gross, and Silas Graybill. The minister in 2008 was Randy E. Heacock. The membership of the congregation (2008) was 175. The congregation has been one of the more progressive bodies in the Franconia Conference, having inaugurated evening services in 1906, sewing circle work in 1908, Bible instruction meetings (Bible conferences) in 1909, Sunday-school meetings in 1914, and young people's Bible meetings in 1915. The congregation also established an outpost known as Trevose Heights. -- John C. Wenger.