The origins of The Mennonite Hour go back to the fall of 1950 when a men’s quartet called The Crusaders received 15 minutes of free time on a Saturday morning, to sing live over WSVA, a local radio station in Harrisonburg, Virginia. On 4 March 1951 the program was expanded to 30 minutes and included testimonies and a short sermon. This expanded program, The Crusaders for Christ. did not have free air time. It had a variety of speakers and was soon incorporated with an independent board of directors in the summer of 1951.

In January 1952, B. Charles Hostetter became the permanent speaker on the broadcast, which was carried on stations in Harrisonburg, Virginia and Doylestown, Pennsylvania. In March 1952 the name changed to The Mennonite Hour in order to identify it as "a missionary project of the church."  By December 1952 The Mennonite Hour was broadcast over 11 stations. 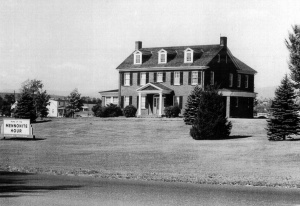 The original staff for the program was all volunteer, but the workload rose as the number of stations increased, generating more letters to be answered. By the end of 1953, when the program was carried on 35 stations, Mildred Graybill (Tillman) was hired as a full time staff person, and Eastern Mennonite College (EMC) provided recording facilities and limited office space. In 1954 Richard Weaver, a skilled radio technician and the recording engineer for The Mennonite Hour, converted his chicken house into a quality recording studio close to the EMC campus. The technical quality of the recorded program greatly improved.

By the end of 1955, Mennonite Broadcasts, formally incorporated in 1956, moved into a spacious three-story, 20-room headquarters along North Main Street in Harrisonburg. There were seven full-time staff,  the broadcast was carried on 49 stations, and new types of programming were added. The Way To Life, an English international program, began in 1956. Heart to Heart, a 15-minute program for women in the home, was picked up in 1958. Various foreign language programs--in French, German. Russian, Spanish, Portuguese, Japanese and Navaho--were eventually added. From 1963 to 1972 The Mennonite Hour was carried on well over 100 radio stations throughout the United States and Canada. By 1961 an office was opened in Kitchener, Ontario to help handle the requests for literature and to process the many letters.

In 1972 Mennonite Broadcasts moved to a larger space along Virginia Avenue in Harrisonburg, close to the campus of Eastern Mennonite College (now University).  Staff had increased to about 30 persons and extensive publishing endeavors had been added, such as Choice Books and the expanded curriculum of Home Bible Study courses. The new building later housed a first rate recording studio (Alive Studios).

The original Mennonite Hour was a 30-minute program of worship and preaching. The radio pastor delivered a 10-minute sermon and various a cappella singing groups provided music: a mixed voice chorus, a men’s chorus, a men’s quartet, and a ladies sextet (later a triple trio in 1961). Members came from the local community, and students, staff, and faculty from Eastern Mennonite College. B. Charles Hostetter served as principal speaker from 1952 to 1965.  His preaching style was simple, direct and effective. Though adapted for radio with extra music, the program had the feel of an evangelical Mennonite worship service. Program director and announcer Norman Derstine (1951-1961) played a key role in coordinating the broadcast. 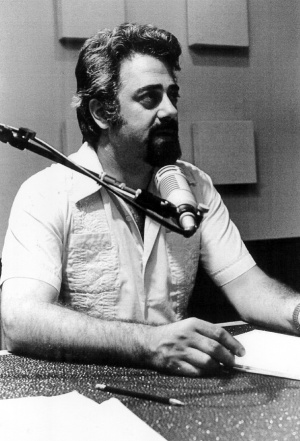 In 1966 the program shortened to 15 minutes and David Augsburger (1961-1975) became the principal speaker. His style focused on the Anabaptist evangelical response to the social concerns of the day: war and peace, racism, and interpersonal relationships. Witty turns of language and thought held attention and conveyed truth. Richard Weaver, the recording technician from the beginning, took over the announcer’s role during Augsburger's years.

David Shank, Willis Breckbill, and Arthur McPhee served brief terms as speakers from March 1975 through 1978.  Finally in 1978, evidence indicated The Mennonite Hour had run its natural course, and that radio industry trends favored shorter, more diversified programming. The Mennonite Broadcasts board authorized the production of a 2.5 minute daily program to replace The Mennonite Hour.

A Cappella singing played a key role on The Mennonite Hour broadcast throughout its history. There were two basic eras. J. Mark Stauffer and Earl Maust provided primary leadership in the early era, mainly the 1950s. The music in their years mirrored good solid congregational style singing. The hymn arrangements were fairly simple. The men’s quartet and ladies’ sextet usually sang from popular song books that introduced the concept of "special music’" in many Mennonite churches. The music on The Mennonite Hour helped raise the standard of Mennonite congregational singing. 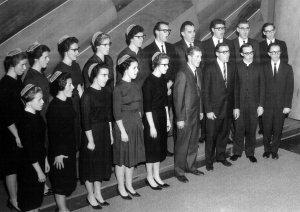 David Augsburger, Marvin Miller, Catherine Mumaw, and David Seitz provided primary music leadership during the 1960s. The hymn arrangements became more elaborate and more choir anthems were used. In general these groups had more advanced trained voices and the singing had a more professional tone. All of The Mennonite Hour singers were well-schooled in the traditional art of of singing in a cappella four-part harmony. The singing was unpretentious, direct,and committed to communicating the Gospel message.

By 1969 all the regular singing groups disbanded. Music was selected from an musical archive of nearly 1000 songs and some outside groups recorded on occasion. A total of 21 vinyl recordings (LPs) were released from 1953 to 1978, some selling over 10,000 copies. The best of the singing from these LP’s and the program archives was later reissued on remastered CDs available from Third Way Media.

Witness, invitation, and proclamation of the Gospel message were themes that permeated The Mennonite Hour radio broadcast. These themes were never "high pressure" or confrontational but rather were personal and invitational. No high pressure fund raising appeals ever appeared on air. The necessary financial support came from records sales, various sponsoring congregations, direct mail solicitation, and dedicated board members.

Horst, John L. "The Role of Music on the Mennonite Hour Broadcast." Unpublished presentation, Sound in the Lands Conference, Conrad Grebel University College, June 2009. Horst was the bass in the Mennonite Hour's male quartet from 1956-1963, and a studio choir member through 1967.

The Programs are courtesy of Third Way Media. Used by Permission

The Musical examples are courtesy of John L. Horst, and were used in his 2009 presentation listed in the Bibliography. Used by permission.

The Mennonite Hour was the official broadcast of the Mennonite Church (MC) through the Mennonite Board of Missions and Charities (MBMC). It formally began in June 1951, under a private organization of Mennonite men, largely at Harrisonburg, Virginia, who formed the Mennonite Crusaders to take over the half-hour Sunday broadcast of a male quartet from Eastern Mennonite College called "Crusaders for Christ," which had begun in March 1951 over the local Harrisonburg station WSVA. In January 1952, B. Charles Hostetter became the radio pastor, a position he still held in 1957. In June 1953 the Crusaders entered into an agreement with the MBMC, whereby the planning and promoting of the broadcast became a cooperative venture under an administrative committee of the Board called "Radio Evangelism Committee." The Crusaders, who had been incorporated in Virginia June 1952, continued to operate and finance the broadcast, however, and did so until 1956, when its name was changed to Mennonite Broadcasts, Inc. The Mennonite Hour was a half-hour program, basically of worship and preaching. The radio pastor delivered a ten-minute sermon, and music was provided as a cappella singing by the Mennonite Hour Chorus, composed largely of community people and students of Eastern Mennonite College (EMC). The program director in the 1950s was Norman Derstine, a local Mennonite minister; music director, Earl Maust of the EMC faculty. The international English version was called "The Way to Life." In early 1957 the Mennonite Hour was broadcast over seventy stations in the United States and foreign countries. Of this number, 56 were in the United States, two in Canada, plus broadcasts in Ceylon, Costa Rica, Ecuador, Jamaica, Liberia, Tangier, Panama, Philippines, Puerto Rico, and Vietnam. The weekly listening audience was estimated in 1957 at five million.  The program was self-sustaining, supported largely by voluntary contributions from the listening audience. The Mennonite Hour Informer was published monthly 1952-1967, and the Mennonite Hour Prayer Guide monthly after 1953. The Mennonite Hour ceased broadcasting in 1979.-- Harold S. Bender