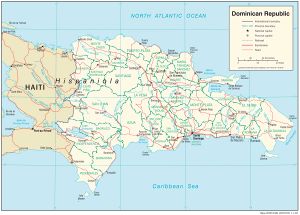 The Dominican Republic; Spanish: República Dominicana, is a country located on the island of Hispaniola in the Greater Antilles archipelago of the Caribbean region. It occupies the eastern five-eighths of the island, which it shares with the Republic of Haiti. The Dominican Republic is the second-largest nation in the Antilles by area (after Cuba) at 48,671 square kilometers (18,792 sq mi), and third by population with approximately 10.5 million people (2020 est.), of whom approximately 3.3 million live in the metropolitan area of Santo Domingo, the capital city. The official language of the country is Spanish. The religious composition of the country in 2017 was Roman Catholic 47.8%, Protestant 21.3%, other 2.2%, none 28%, don't know/no response .7%

The native Taíno people had inhabited Hispaniola before the arrival of the Europeans, dividing it into five chiefdoms. The Taíno people had eventually moved north over many years, and lived around the Caribbean islands. Christopher Columbus explored and claimed the island, landing here on his first voyage in 1492. The colony of Santo Domingo became the site of the first permanent European settlement in the Americas, the oldest continuously inhabited city, and the first seat of the Spanish colonial rule in the New World. Meanwhile, France occupied the western third of Hispaniola, naming their colony Saint-Domingue, which became the independent state of Haiti in 1804. Dominican independence came in 1844, after victory in the Dominican War of Independence. The United States occupied the country between 1916 and 1924. From 1930 the dictatorship of Rafael Leónidas Trujillo ruled until 1961. A civil war in 1965, the country's last, was ended by U.S. military occupation and was followed by the authoritarian rule of Joaquín Balaguer, Antonio Guzmán and Salvador Jorge Blanco (1982–1986). Since 1996 the Dominican Republic has moved toward representative democracy.

Mennonite mission work in the Dominican Republic was initiated by the Evangelical Mennonite Church (U.S.A.; today called “Fellowship of Evangelical Churches”) in 1943. The first Mennonite missionary in the Dominican Republic was Lucille Rupp who arrived in August 1945 and stayed first in the border zone with Haiti known as Dajabón, where the Missionary Church was also beginning its mission work, before moving her work further south. In February 1946 Omar and Laura Sutton arrived to take charge of the Mennonite work on the border between the Dominican and Haiti; they decided to establish their center of operations in El Cercado.

The first Mennonite church in the Dominican Republic was established in April 1948, when 13 persons were baptized at El Cercado. Later the work spread to other towns such as Elias Piña, El Llano, Las Matas Farfán and La Racha. In 1951 the first annual conference of established churches took place in El Cercado; the organization officially adopted the name “Sureña Evangelical Church.”

Sureña Evangelical Collegiate commenced its educational work in 1956. Later it was named the “Lucille Rupp School,” in honor of its first director. Another early institution was the bookstore El Heraldo, founded in 1958. In 1957 the conference was made up of 11 Mennonite churches, with 178 baptized members; the majority of these churches were led by Dominican pastors.

The revolutionary political climate in the Caribbean, given the drastic changes that had occurred in Cuba, led to a reconsideration of the organizational structure of the church. In 1964 it changed the name of the conference from “Sureña Evangelical Church” to “Evangelical Mennonite Church of the Dominican Republic” (EMCDR: Iglesia Evangélica Menonita en la República Dominicana) and transferred the holdings of the mission board to the local leadership of the conference.

New Mennonite activity came with the “Divine Beacon” (Faro Divino) National Mennonite Council, which has Pentecostal origins. On a visit to the United States Hilario de Jesús, a Dominican Pentecostal pastor, came into contact with José Santiago, secretary of the Eastern Mennonite Mission board. When Santiago in turn visited Hilario in the Dominican Republic in 1974, Hilario de Jesús convened three other pastors and together they decided to associate with the Mennonites. Eastern Mennonite Missions supported these churches economically and by sending missionaries to help in a variety of ways. The Central Church of Bonao became one of the most active churches of this new Council, soon establishing five new congregations.

The following Anabaptist groups were active in the Dominican Republic in 2020: