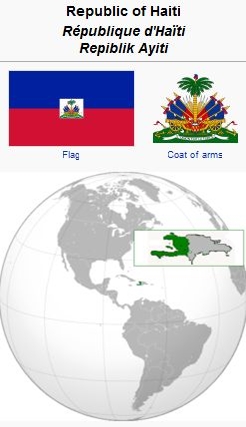 The Republic of Haiti is located on the western half of the island of Hispaniola, in the Greater Antillean archipelago. The population, estimated in 2009 to be 10,033,000, is 95% black and 5% mulatto and white. The official languages are Haitian Creole and French. While it is reported that 80% of the population is Roman Catholic and 16% is Protestant, roughly half of the population practices Haitian Vodou. Economically, Haiti is the poorest country in the Americas. Haiti was the first independent nation in Latin America and the first post-colonial independent black-led nation in the world. Unfortunately, many of Haiti's rulers have been dictators, the most recent being the Duvalier family that ruled the country as dictators from 1957 to 1986.

Mennonite Central Committee (MCC) assistance began in 1958 with two Pax volunteers assigned to an agriculture project in Petit Grave with Haitian Methodist pastor Marco Depestre. Later MCC began sending nurses to Hospital Albert Schweitzer in Deschapelles. A program began in Grande Rivière du Nord in 1959 at the invitation of the Haitian government. Until 1979 MCC administered a hospital, assisted local schools, organized a cooperative of handicrafts producers, and carried out numerous activities in agriculture and community development in Grande Rivière du Nord. Since 1979, MCC programs in the northeast and Artibonite Valley have focused on community development, reforestation, and community health.

Following hurricanes in 1963 and 1966, Mennonite Disaster Service (MDS) and MCC cooperated to construct houses in Côtes de Fer and Marigot. Various MDS team members continued to relate to several Haitian pastors they had met, particularly in Miragoane. Several independently constituted Mennonite organizations began visiting on a regular basis. Short-term workers came under the auspices of these organizations to work with the Haitian pastors in health clinics, agriculture, well-drilling, and construction of schools and churches.

In 1963 MCC introduced several representatives of the Church of God in Christ, Mennonite (Holdeman), to the government of Haiti and was instrumental in helping them get established. Registered in Haiti as "Mission Mennonite" (Église de Dieu en Christ, Mennonite), they became involved in church planting, nutrition, tuberculosis control, and water catchment for poor families. Goshen College established a Study Service Trimester program (SST) in Haiti in 1969, bringing college students to the island for short-term service and international education. Since early 1986, the SST unit was not operational. Eastern Mennonite Board of Missions and Charities (MC) has been involved since the mid-1960s in the Extension Bible School Program (EBEX) of the Council of Evangelical Churches of Haiti (CEEH). In 1986 an Eastern Board missionary couple was seconded to CEEH to work full-time in the EBEX leadership training program.

Among other Mennonite organizations with significant programs in Haiti are Mennonite Economic Development Associates, Blue Ridge Christian Homes (Beachy Amish Mennonite Fellowship), Palm Grove Mission Board, Virginia Conference Mission Board, Christian Fellowship Mission, Gospel Mission to Haiti and Sonlight Mission (Église Mennonite Sonlight Mission). A meeting of the proliferating Mennonite groups working in Haiti was organized in 1978 for the purpose of sharing concerns and common interests. This meeting, usually held in January, has continued almost annually since then. -- Eldon Stoltzfus

In 2020 the following Anabaptist groups were active in Haiti: