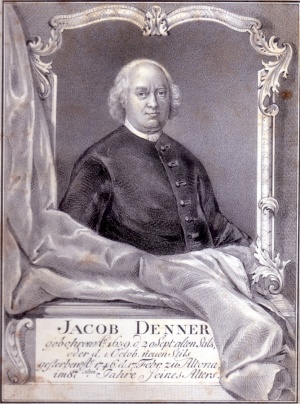 Jakob Denner.
Source: Frontispiece of 1860 Philadelphia imprint of his sermons

Jakob Denner: Mennonite-Dompelaar preacher of Altona near Hamburg, Germany, and author of pietistic devotional books of wide circulation; born on 20 September 1659 (N.S. date = 1 October 1659) in Altona, a village on the right bank of the Elbe River about two kilometres west of Hamburg. His father was Balthasar Denner (1624-1681). In 1684 Jacob Denner married Catharina Wiebe (1663-1743) from Lübeck, daughter of Cornelius Wiebe and Magdalena (Wynand) Wiebe. They had seven children, six daughters and one son. Jacob and Catharina raised a family of very gifted and talented children and grandchildren. Their son, Balthasar (1685-1749), and their son-in-law, Dominicus van der Smissen (1707-1760), gained international renown as portrait artists. He died on 17 February 1746 at the age of 86 and was buried in the Mennonite Cemetery on the Grosse Roosen Strasse in Altona.

In his youth Jakob learned the dyeing trade and studied mathematics and astronomy. He made long trips all over Europe. On 26 September 1684 he was ordained minister of the Mennonite church in Altona, but he also preached in Lübeck (1687-1694), Friedrichstadt (1694-1698), and Danzig (1698-1702). Then he returned to Altona to preach for a time in the "large" Mennonite church, on the condition that he was not to preach any particularly Dompelaar doctrines. In 1708 Ernst Goverts, a wealthy Hamburg merchant, who was a deacon in the Mennonite church, helped him build a Dompelaar church. In 1732 Denner bought this church and requested the congregation to make contributions to pay for it.

Denner's strongly emotional sermons were widely acclaimed, and were attended by members of all Protestant groups. His delivery was called "gentle and sincere," and his personality "charming and pleasant." The nobility of Holstein and Denmark associated with him, and the later king of Sweden frequently attended his sermons. He never held the Lord's Supper in his congregation, and he performed the ceremonies of baptism and marriage only on his own children. Some of the orthodox Lutheran clergymen of Hamburg passionately opposed his activities (the new Pietism) and preached against him. (For an account of the open opposition in the Marienkirche, see Schultze, Daniel Severin and Mennonitische Blätter 1880: 71 f.) After Denner's death the Dompelaar congregation declined, and the church was taken over by the Moravians.

Denner's writings exerted a tremendous influence in and beyond the Mennonite church, and did much to promote pietistic tendencies among the Mennonites. His extremely long and emotional printed sermons served both as devotional reading and as material to be read verbatim from the pulpit at Sunday services. He published two main sets of such sermons: (a) Eenige Christelyke Uitbreidingen over verscheidene Schrijtuurtijke Texte (Amsterdam and Danzig, 1706), containing 24 sermons on texts of the Old and New Testaments (at that time preaching in Hamburg and Danzig was still done in the Dutch language). Against this book Daniel S. Scultetus published his Wohlgemeinte Warnung an die Evangelischen in Hamburg vor der Gemeinschaft des Gottesdienstes der Mennoniten. (b) The Wysheid des Heeren (Amsterdam and Danzig, 1707), containing some 50 sermons on the Gospels for every Sunday and holiday. Also against this book a violent attack was published by the Hamburg Lutheran pastor E. Neumeister. (c) Both these books were then republished in the same year as one volume under the title, Eenvoudige predicatien . . . (Amsterdam, 1707). A second edition of the combination book appeared in Hoorn, in 1771, entitled LXXI Predicatien.

In 1730 the first German edition of the complete sermon collection was published in Hamburg under the title, Einfältige und christliche Betrachtungen . . . ; Part I: Erbauliche Betrachtungen über die Sonn- und Festtagsevangelia (1,366 pages, the sermons of book b), and Part II: Einfältige und christliche Betrachtungen über einige Texte des Alten und Neuen Testaments (352 pages, the sermons of book a). It is a book of 1,718 pages quarto size. In spite of its bulk the book had a tremendous appeal to Christians of all types, there being no less than five German editions (besides the two Dutch ones), and one attempted English edition. The German editions are: 1730 and 1739, Hamburg; 1751, Königsberg; 1792, Frankenthal am Rheinland 1860, Philadelphia. The English edition was planned in 1901, the translation was completed, the first proof sheets were published (for use in promotion), yet the undertaking eventually stopped due to lack of funds and subscribers. All posthumous editions contain besides the sermons of (a) and (b) also three sermons on the Lord's Prayer and a meditation on the nobility of the conscience. An engraved portrait of Denner is used as a frontispiece.

The story of the 1792 edition is particularly revealing. Two laymen in the Franconia (Pennsylvania) Mennonite Conference, Johannes Herstein and Johannes Schmutz, undertook in that year the hardship of a voyage across the Atlantic to Germany for the sole purpose of procuring an edition of the big book for the brethren of their conference. When they returned they brought along and quickly sold no fewer than 500 copies of this work. It demonstrates the strong pietistic interests and longings of the Mennonite church of that time and even later (1860, 1901). The book is still to be found in many Mennonite homes in the Palatinate, in Pennsylvania and in the prairie states.