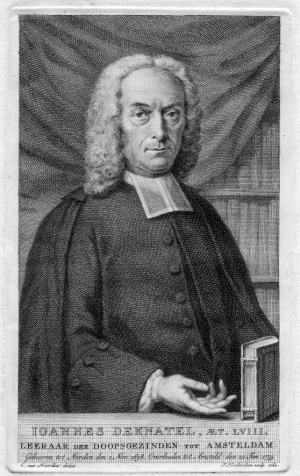 Jeme Deknatel (or as he later called himself, Joannes), a Dutch Mennonite preacher, the author of widely used devotional books and the chief promoter of Pietism among the Dutch Mennonites and, through his writings, among the Mennonites of the Palatinate, born 1 November 1698, at Norden in East Friesland, died 22 January 1759 at Amsterdam. He was educated 1717-20 at the Remonstrant seminary at Amsterdam, where he studied under Jan le Clerc (Clerieus) and Adriaan van Cattenburgh. When his father, a deacon at Norden, lost a large part of his property in a flood, his further education was sponsored by the church council of the Lamist congregation of Amsterdam.

On 12 December 1720, Deknatel became assistant minister of the Amsterdam Lamist church with a salary of 300 guilders. Five years later, on 20 October 1725, he was chosen as the fourth preacher of the congregation with a salary of 1,200 guilders. He preached his sermon of installation on 13 January 1726, on 1 Timothy 4:16. His colleagues were Dominicus Eekens, Bartholomeus van Leuvenig, and Johannes Bremer; in spite of differing views on the church, they worked together very well. Deknatel took an active part in the founding of the Amsterdam Mennonite Seminary, and participated in the establishment of the fund for the support of inadequately paid ministers, which still bears his name (Fonds van Deknatel). He took a special interest in young Mennonite students of theology, caring for them like a father. This is attested by Marcus Arisz in his letters written to Deknatel's son Jan (Mennonitisches Blätter, 1859, 12, 29).

In December 1734 Deknatel made the acquaintance of A. G. Spangenberg, the bishop of the Moravian Brethren, who was visiting Amsterdam, an event that was to be of lasting influence upon his character. Two years later he also met Count Nicholas von Zinzendorf, on the occasion of Zinzendorf's visit to Amsterdam from February to March 1736. A warm friendship developed between Deknatel and Zinzendorf and the Moravian Brethren. During Zinzendorf's visit of several weeks in Amsterdam in 1737 he celebrated communion in Deknatel's home. Deknatel alternated with the Reformed preachers in conducting services for the Moravian congregation and attended their conferences in Zeist where they had their center. He translated and published several hymns from the Moravian hymnal. His sons Jan and Jakob he sent to Germany to be educated at the schools of the Moravian Brethren at Lindheim and Marienborn in Wetterau. When he called them home, bad feelings arose between him and Zinzendorf. Deknatel united with the Moravian congregation organized in Amsterdam on 25 November 1738, at the very outset, although he also remained loyal to his own brotherhood. In a letter to Leonard Dober (30 December 1749), he declared that he and his wife had been drawn closer to the Savior through their contact with the Moravian Brethren and had rid themselves of much of their self-love and "self-made piety." But from 1751 on, he withdrew more and more from the Brethren. Deknatel thought that they should limit their activity to pastoral work, and not preach or set up a new church. A loan made by Deknatel to Zinzendorf, which Zinzendorf was unable to pay back, also disturbed their relationship. Nevertheless he remained on friendly terms with the Brethren, while at the same time he was warmly attached to his own brotherhood. "I have love for all men, and believe in a common Christian Church. Nevertheless I must testify that I bear my Mennonite brethren upon my heart and above all my own congregation, among whom I have been a member since my youth, and whose salvation (Heil) I seek to promote like my own." His fellowship with many outstanding men of God is attested by his extensive correspondence. In true brotherhood the Lutheran O. Martens wrote him from Copenhagen (12 March 1737); David Nitschmann, the bishop of the Moravian Brethren, sent him letters from the Ronneburg castle (19 June 1738) and from Pennsylvania (3 January 1741). Deknatel exchanged a number of letters with the Swabian pastor Friedrich Christoph Steinhofer in Ehningen near Tübingen, whom he had met at a conference in Zeist (Mennonitisches Blätter, 1858), and also with L. Dober (30 December 1749). John Wesley was a guest in his home in 1738 and relates in his journal that he was received by Deknatel with Christian congeniality and heard one of Deknatel's sermons, which he liked so well that he took notes on it. Deknatel was at this time already a genuinely ecumenical Christian.

Deknatel's influence was great and lasting, extending far beyond the Dutch borders. Many of his writings were translated into German and were widely read. Some of his sermons were printed in America in the 19th century (Acht Predigten . . . , Allentown, 1835; Eine Reihe von Predigten . . . , Quakertown, 1883).

The [[Amsterdam Mennonite Library (Bibliotheek en Archief van de Vereenigde Doopsgezinde Gemeente te Amsterdam)|Amsterdam archives ]]contain letters written to Deknatel by the Hutterian Brethren of Sobotište in Hungary (Mennonitisches Blätter, 1894, 46). Mennonites of Switzerland traveled to Holland to visit the beloved and noted preacher. Until very recently his sermons were zealously read in Mennonite homes in the Palatinate. His catechism, Anleitung zum Christlichen Glauben, was long used by the Mennonites of South Germany. On 7 March 1757, Deknatel wrote an impressive letter to the Friedelsheim (Palatinate) congregation, which was published under the title, Der Weg zur Seligkeit, geschrieben an die Gemeinde zu Friedelsheim (Mennonitisches Blätter, 1857, 56 ff.). Deknatel was attacked by the Dutch Reformed preacher G. Kulenkamp in Aanmerkingen (1740).

Among the Dutch Mennonites Deknatel occupied a unique place. He was a "Pietist among the Mennonites" (Leendertz), and in his experiential piety (Bevindelijkheid) he was quite different from the Lamist group to which he belonged, who were rather inclined toward rationalism. Nevertheless he was on good terms with his Amsterdam colleagues van Leuvenig and especially with Bremer, whose funeral address he delivered. He made many trips, holding revival meetings in many Dutch Mennonite churches. These were not always kindly received. The Mennonite church in Harlingen, of which Joannes Stinstra was the pastor, was denied him. In his house on the Leliegracht in Amsterdam he held regular Sunday evening devotional exercises, which were attended by many members of the Reformed Church, and which therefore caused some trouble in 1749.