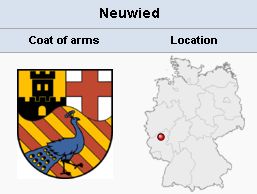 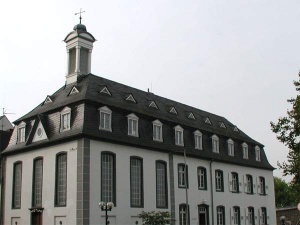 Neuwied is a town (pop. 20,670 in 1959, 67,021 on 1 January 2005) in the former Prussian Rhine Province of Germany, since 1945 in Rhineland-Palatinate, seven miles northwest of Koblenz. In 1574 the Anabaptists were expelled from the gravure of Wied (Fahr and Irlich). An influx of Mennonites and the organization of a congregation were not possible until Count Frederick of Wied founded Neuwied as a residential town in 1652, and offered freedom of worship to all creeds. The Mennonites who came to Neuwied at that time stemmed from Jülich and Monschau, the Palatinate, and Switzerland. They were peasants and craftsmen (weavers and clockmakers). After they had been living here in peace for about twenty years the counts tried in 1678 to compel them to attend the Reformed Church now and then; when they refused to comply they were given a guarantee of religious liberty on 16 December 1680, "in consideration of their persistent plea and their quiet life and conduct." This document names the families of Linschet, Krey, Rupp, and Sintzenich. In 1694 a number of oppressed Mennonites from the Palatinate settled near Neuwied. In 1710 the Count of Neuwied was disposed to grant citizenship to the Mennonite refugees from Switzerland. In 1767 a number of Mennonites from Württemberg settled at Neuwied.

After Count Frederick's death some difficulties arose on the questions of reception into the guilds and guard duty; but on the whole the Mennonites of Neuwied could live according to their beliefs. Indeed, the count even encouraged the building up of the congregation. Lorentz Friedenreich, the elder of the congregation, wrote in 1769 that they were not only given protection and toleration like all other churches, but were encouraged to invite more Mennonites to come from the Palatinate; they would have invited more if economic conditions had permitted. But for weavers and peasants these were not too favorable; hence the membership remained small, never exceeding 80.

Until 1768 services were held in homes as required by the government. In 1768 Count Alexander ordered the Mennonites to erect a suitable church near the castle grounds. With generous assistance from their brethren in Holland a small church could be built, with an adjoining residence for the needy, and on 6 November 1768 the church was dedicated in the presence of the count's family. In 1826 an organ was put into the church, and in 1861, as a gift from the count, a small tower with a bell.

The intellectual life and manner of living were no different here from other Mennonite communities of the time. Simplicity, tolerance, and quietness were characteristic of them. When Lavater, together with Basedow and Goethe, visited the Neuwied congregation on 19 July 1774, he noted in his diary, "Visited the Mennonites Friedenreich and Kintzing, splendid faces full of simplicity and honesty, and around them—many boys and daughters and mothers' faces equally noble, innocent, affectionate, went into their church without tower or bell, spoke of their services, looked into their orthodox catechism —Basedow asked whether they would receive one who did not believe in the Trinity—received the reply—not to communion—looked over their artistic clocks—microscopes." In the 18th century the following ministers served at Neuwied: Thielmann Rupp ca.1760, Lorentz Friedenreich, elder 1758-ca. 1795; Jakob Jutzy (?), elder 1758-ca. 1798; Heinrich Friedenreich 1788, Peter Weber 1793. In the 17th century the following served the congregation: Heinrich Rupp (d. 1637), a Vorsteher, in whose home the meetings were held for a time; Tillmann Rupp (d. 1649), a Vorsteher for 26 years, and his son Leonhard (d. 1683) for 18 years.

Concerning their legal status Fischer wrote in 1777: "The Mennonite brotherhood has its own distinctive organization, which differs from the three tolerated churches; it has no particular organization, but rather stresses quietness and inner piety, where no superior gives orders, but all regulations depend on the consent of all members. Thus a church inspection would not be of practical use, because they are allowed freedom of religion, and the rulers of the land have so little prescribed their doctrine or even sanctioned it, that one is not concerned with their doctrine but only considers whether their toleration is harmful to the state."

In the 19th century a deep change took place in the life of the congregation. Economic conditions induced many to immigrate to America. Furthermore, several families died out, and others joined the Reformed Church. (In 1817 there were including the children 76 members; in 1850, 40; in 1900, 88; in 1940 hardly 25.) The old spirit was dying. There was no one who would take charge of the preaching. And so it was decided to employ a salaried minister. With financial support from Holland and a fund raised by the members, trained preachers served the congregation in 1829-1909. Of these preachers, Karl Harder was outstanding; he preached at Neuwied 1858-1869 and was given honorable mention by the royal poet Carmen Sylva in her autobiography, Mein Penatenwinkel. In 1867 the Neuwied congregation joined the Algemene Doopsgezinde Sociëteit (Dutch General Conference). Pastor Harder was followed by August Billau 1871-1892, Adolf Siebert 1893-98, and Gerhard Haake 1898-1910. After this the ministers of the Krefeld Mennonite Church took over the pastoral care of the congregation, with regular preaching appointments.

After World War II a number of Mennonite refugees from West Prussia settled in the neighborhood of Neuwied. With the help of the Mennonite Central Committee the congregation was built up. In 1948 Gerhard Fast became preacher, and in 1952 Otto Wiebe, formerly of Marienburg, West Prussia, elder. The baptized membership numbered about 360 in 1956.

By special agreement with the Mennonite Central Committee (MCC), which made some contributions, the German government granted Mennonite refugees from West Prussia the privilege to purchase a series of 14 one-family houses and 8 two-family houses in the Torney heights in Niederbieber a few miles from Neuwied in 1950-1951. A chapel was built in Niederbieber in 1955, and certain services were now held here. One of the houses was occupied for almost a year by a group of Pax men (Mennonite conscientious objectors from the United States doing their two years of I-W [alternative] service in Europe) who had set up a cement block factory and made blocks (bimsblocks) for the houses they were building in Espelkamp.

The traveler going from Andernach to Laach Lake is acquainted with the Mennonite farms and small Mennonite cemetery near Eich. They were the remains of a small Swiss ("Schwitzer") congregation, but which, reduced in number, later reunited with Neuwied.

A small Mennonite Brethren congregation was established in Neuwied about 1950, which acquired a meetinghouse in 1956, and had about 15 members. -- Dirk Cattepoel, Harold S. Bender

Neuwied, a city of more than 30,000 people in 1987, favorably located in central West Germany, frequently hosted Mennonite meetings and conventions. In 1986 there were four flourishing Mennonite churches in Neuwied. (1) The Evangelische Mennonitengemeinde (431 members) dated back to 1680. The congregation almost became extinct after World War II, but attracted West Prussian Mennonite refugees when a settlement on the "Torney" hill was erected with the assistance of the Mennonite Central Committee and Pax volunteers (1950-1954). The historic meetinghouse in the old city, built in 1768, has been sold because most of the members are living near the new center at the "Torney." (The old rococo-style meetinghouse was gutted by fire and will be reconstructed as a cultural center for the city of Neuwied.) (2) The Mennoniten-Brüdergemeinde - Evangelische Freikirche (300 members) was established in the 1950s by the missionary efforts of the North American Mennonite Brethren mission board. The members were predominantly not of Mennonite background. (3) The Mennonitengemeinde (90 members) was established in 1977 by "Kirchliche" Mennonites resettling from the Soviet Union (Umsiedler). (4) The Neue Mennoniten-Brüdergemeinde Neuwied (230 members) was established in 1979 by resettlers with a Mennonite Brethren background. Both resettler churches chose not to join the established churches; they did not belong to a conference. Mennonite Central Committee European offices and offices of the International Mennonite Organization are also located in Neuwied. -- Diether Götz Lichdi