Alzey was the county seat of the Hessian province of Rheinhessen, Germany, where the teachings of the Anabaptists had already at the beginning of the Reformation found numerous adherents. The violent attempt of Dietrich von Schönberg (burgrave of Alzey 1520-1532) to suppress the Anabaptist movement caused a great stir and induced Pastor Johann Odenbach at Moscheln in the adjacent territory of Zweibrücken to make a powerful appeal on their behalf to the judge at Alzey. The document, one of the few writings of the Reformation period that opposed the use of force in matters concerning faith, appeared in print the same year with the title, Ein Sendbrieff und Ratschlag an verordnete Richter über die armen gefangenen zu Altzey, so man nennet Wiederteuffer. (A copy is in the State Library in München.) The judges refused to sentence them, since there had been no infraction of the law; but the prisoners were later executed without sentence, the nine men beheaded and the women drowned. The burgrave dealt in like fashion with all the Anabaptists who fell into his hands; he had them taken from their homes and like beasts of slaughter led to the place of execution. Cheerfully, says the Hutterite chronicle, they went to their death. While the Brethren were being executed or drowned, the survivors sang hymns of praise (Beck, Geschichts-Bücher). In his official opinion to the council of Nürnberg, Dr. Scheurl asserted that the mass executions had taken place before July 1528. The sorrows of these martyrs are depicted in a song of forty-one stanzas: "Herr Gott, in Deinem Reich," found in Die Lieder der Hutterischen Brüder. 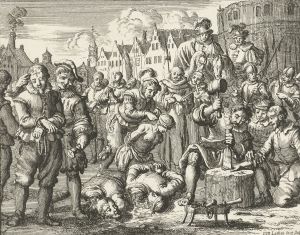 It is not clear from the incomplete archival records how many Anabaptists were executed. The only official document that stated the number of prisoners, viz., the statement of Chancellor Venningen, had already been completed before the proclamation of the electoral mandate of 5 March 1528. It named 20 prisoners, no women being among them. The author remarked that 20 women were suspected of Anabaptism, but they had not been arrested nor examined by the inquisitor (Krebs, 573). Meanwhile the high reward offered in the electoral mandate had resulted in an increase in the number of prisoners. Now there were no longer only the 20 Anabaptists of the chancellor's statement, for it was mentioned that a new judgment would now have to be arrived at concerning the new prisoners. The Hutterite chronicle placed the number executed in the Palatinate at 350, basing this on the testimony of refugees who later came to Moravia from the Palatinate and who had witnessed how the Anabaptists there had been seized in their homes "and brought to the place of judgment like sheep to the slaughter." They reported that those who recanted had their fingers cut off or a cross branded on their foreheads with a red-hot iron (Beck, 30 f.). The latter statements are also confirmed in an extant official document. Those who recanted had to leave the country, and were threatened with the death penalty in case they should return to the Palatinate or backslide again into Anabaptism (Hege, 65).

The number 350 as given by the Hutterite chronicle for the martyrs of Alzey has been questioned by certain historians, since a list of martyrs that was found on the person of Julius Lober at the time of his arrest (which, to be sure, makes no claim to completeness) mentions only 14 executions at Alzey, three at Heidelberg, and five at Bruchsal (Beck, 311). Since further documentary evidence is lacking, the exact number of the martyrs can no longer be determined. It is worthwhile to note in this connection, however, the statements of Philipp Rupp of Nussloch near Heidelberg, who on 1 May 1529 was asked by the judge where "the great mass of Anabaptists" might be, and replied, "It is not to be known. There were formerly more but they have been destroyed by murder" (Hege, 62). The reports in the Hutterite chronicle that the elector suffered great remorse on account of the many executions also suggest that there must have been a large number of martyrs. These reports add that the authorities did not soon again take the life of an Anabaptist "although they persecute, exile, and do not tolerate us until the present day" (Beck, 32). These statements are confirmed by the fact that after 1529, in spite of imperial mandates and the decrees of the Reichstag, so far as is known, no further executions of Anabaptists took place in the Palatinate.

By this barbarous method the Anabaptist movement was temporarily suppressed in the region of Alzey, but 30 years later it reappeared, when Hutterite missionaries labored here and induced their adherents to emigrate to Moravia. Again the authorities opposed them. In the fall of 1567 Missionary Leonhard Dax was arrested with his wife and several fellow believers, and imprisoned in the castle at Alzey, the ruins of which are still standing. Dax had to answer repeatedly to the superintendent. An excerpt from the proceedings was published in Schnellhorn's Sammlung für die Geschichte, vornehmlich zur Kirchen- und Gelehrtengeschichte (Nördlingen, 1779) 380-399. Also extant are letters of consolation to the prisoners at Alzey written by Kaspar Braitmichel and Peter Walpot; they were in the possession of the Hutterian Brethren at Frankfort, South Dakota in the 1950s. Dax was released 25 February 1568; his writing of 1567, Ein Bekanntnuss und Rechenschaft, in which he explained that the defensive arguments of the Anabaptists had not received adequate attention, was a factor in inducing Friedrich III, elector Palatine, to arrange for the disputation of 28 May to 19 June 1571 at Frankenthal. In spite of repeated orders of banishment, the Anabaptists succeeded in maintaining themselves in the region of Alzey until near the close of the sixteenth century. But finally they, like all the other Anabaptists of the Palatinate, had to yield to government pressure and emigrate to Moravia, the only country where they could at that time exercise their faith unmolested.

After the Thirty Years' War (1648) Anabaptists found toleration in the Palatinate. The elector Karl Ludwig offered them protection since he needed laborers to rebuild his devastated land. Here Anabaptist exiles from Switzerland, the Mennonites of today, found refuge. A government report of 14 January 1686, counted in Alzey 147 families with 280 children. Then the desolation of the war of Louis XIV of France came over the Palatinate, and the great emigrations to America began. In 1697 the reports (Karlsruhe General State Archives) record sixty-four families, in 1717 only nineteen. Then the number rose again. In 1743 there were 287 persons, in 1739, 575 persons (eighty-five families), and in 1773, 635 persons.

The district of Alzey, since 1815 reduced in size and incorporated in Rheinhessen, included in Reformation times a large part of the present-day province of Rheinhessen; and a number of the localities listed then as having Anabaptists, have Mennonites today, though no longer in the modern district (Kreis) of Alzey. These Mennonites belong to the congregations of Ibersheim, Monsheim, Weierhof and Uffhofen. The now extinct congregations of Oberflörsheim, Erbesbüdesheim, and Spiesheim-Wallertheim were in the old Alzey district. By the 1950s, only Uffhofen was in Alzey. It was, however, the successor to the former Erbesbüdesheim and Spiesheim-Wallertheim congregations.

Krebs, Manfred. Quellen zur Geschichte der Täufer. IV. Band, Baden and Pfalz. Gütersloh: C. Bertelsmann, 1951. This volume contains all the archival materials relating to Alzey Anabaptists in the chapter "Kurpfalz," including the statement by Chancellor Venningen, the "Denkschrift" by Odenbach, the statement by Otther, the mandate of 5 March 5 1528 and the record of the examination of the accused at Nussloch.