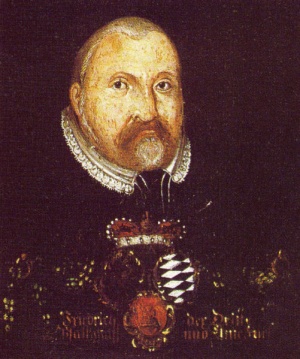 Friedrich III (Frederick), Elector Palatine of the Rhine (Kurfürst von der Pfalz), 1559-1576: born 14 February 1515, the son of Johann II, Count Palatine of Pfalz-Simmern (1492-1557) and Beatrix von Baden (1492-1535). He succeeded his father as count in Simmern in 1557 and became Elector Palatine in 1559 after Elector Otto Heinrich died without children. In his youth Friedrich was strictly educated in the Roman Catholic faith.

His wife, Maria of Brandenburg-Kulmbach (1519-1567), whom he married in 1537, influenced him with her Protestant faith, and he made a public profession of the same in 1546. Thus, in opposition to his father, he had embraced Lutheranism. However, eventually Friedrich was repelled by some degeneration in Lutheranism and, in opposition to nearly all his subjects, he came to the conclusion that Calvin had penetrated most deeply into the thought of the Holy Scriptures. By January 1561 Friedrich had fully adopted the Calvinist position. Heidelberg now became the German stronghold of the Reformed Church; the Heidelberg Catechism became the most popular expression of Reformed doctrine.

With the determination peculiar to Calvinism the elector took action against other faiths. Like so many genuinely pious Catholic and Protestant rulers of that time he felt responsible to God for the orthodoxy and salvation of his subjects. Many Palatines remained true to the old church, and were not molested as long as they did not carry out its worship. Many Lutheran pastors gave up their positions, refusing to renounce their faith. As Calvin had Servetus taken to the stakes for denial of the Trinity, so also the Inspector Johannes Silvanus of Ladenburg was executed on the public market place in Heidelberg for the same error. On 11 April 1571, the elector signed the death sentence.

A day earlier, on April 10, Friedrich had invited the Anabaptists to a disputation in Frankenthal. He had hitherto been unwilling to enforce the stern imperial laws against them, for he thought them only poor, simple, good, but misled people. Now their elders and preachers were to express themselves openly, have safe conduct for two weeks before and after the disputation, and free lodging. In every city and village the invitation was publicly posted and twice read from the pulpits. Only 15 participants appeared. Nevertheless Friedrich appeared at the opening in person and had the daily report brought to him in Heidelberg. When he saw his well-intended attempt to win them to the state church and bring about a unity of faith in his realm end in failure in spite of his efforts, he was conceivably wrought up. Bitterly he complained about the "bad fellows." He forbade them to preach or baptize and threatened severe penalties. At a synod in 1573 they were classed with magicians and sorcerers. In his will he again emphatically said, "Our children shall not be permitted to become eight, nine, or ten years old . . . and then be baptized." But he did not expel the Anabaptists. The Elector had wished to enforce the severe church discipline of Geneva on his light-hearted, wine-loving subjects, and had met in part active resistance, and in part dull apathy. Perhaps he did not, after all, overlook the fact that the Anabaptists, in spite of their false doctrines, lived more in accord with his demands of Christian living than many a Reformed congregation.

Friedrich was a serious person, not always free of harsh traits and not always entirely honest; in conducting a state this may be difficult or impossible. He died 26 October 1576 and in his will he ordered that the Palatinate was to remain Calvinist. However, his oldest son and successor, Ludwig VI (1539-1583), was raised as a Lutheran by his mother, and he did not abide by his father’s wishes. As a result, the state religion again became Lutheran. Many preachers, refusing to make the change, were dismissed. Under Ludwig's brother Johann Casimir and Ludwig's son Friedrich IV the Reformed Church was reinstated, and the Lutheran preachers and teachers experienced the same fate as the Reformed had previously met. But the people for the most part accepted the change apathetically, as they did a change in the weather (a Heidelberg poet's observation). But does spiritual violence of this type not leave its traces on the character of a people? Most of the populace remained Lutheran in mind (as did the Catholics) in spite of the Reformed order of service.