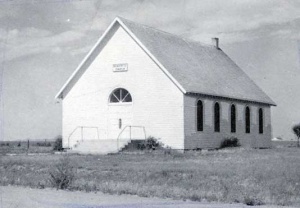 In 1885 Abraham Stutzman, from Milford, Nebraska, traveled to the South Platte River Valley in western Nebraska just north of the Colorado border looking for good farm land. Subsequently, he filed on a quarter section of land two miles (3.3 km) east of Chappell (a town that had been platted along the Union Pacific Railroad in 1884) before returning home. In April 1886 Abraham's son, Adam, and family were the first to settle permanently in the area. That fall, Abraham's family and six other families from eastern Nebraska (who had previously moved from Holmes County, Ohio, to Seward County, Nebraska) moved to the Chappell area. During 1887-89, other families joined the growing settlement, some from as far east as Indiana.

During the early years of the settlement, the Chappell-area Mennonites conducted worship services on a bi-weekly basis. Two ministers, Jonathan Smucker from Indiana and Joseph Birky from Tiskilwa, Illinois, were appointed in 1888 by the eastern Mennonite conferences to assist their scattered members in Nebraska and other western states. When the ministers conducted meetings in Chappell, they appointed an older brother to oversee the group's services. The group formally organized as the East Fairview Mennonite Church on 1 December 1888 with 28 charter members. On 13 April 1889 Christian Sutter donated land six miles (10 km) northeast of Chappell for a building and cemetery, and work was begun on a church structure. During the summer of 1890 the church building was completed. To meet the leadership needs of the congregation, Nicholas C. Roth was ordained to the ministry by Joseph Birky on 17 May 1891. More than two years later, on 10 November 1893, John Ernst was ordained as deacon.

During the early 1890s a major drought devastated the area, and many of the farmers returned to their previous settlements or moved elsewhere. Following some dry years, the rains returned, and this along with the establishment of improved dry farming methods, led to a new influx of settlers to the Chappell area by 1910.

In January 1917 the growing congregation decided to build a new, larger church structure, in part because the congregation was to host the Nebraska Sunday School Conference in the spring. The new structure was dedicated on 27 May 1917. During this period the church's membership was augmented by the addition of a group of Mennonites living some 15 miles southeast of Chappell near Julesburg in northeastern Colorado.

The congregation's membership in 1954 was 63, about 75 per cent of whom lived either in Chappell or in Julesburg. The ministers in 1954 were John Roth and Fred Gingerich.

During the 1950s sentiment within the congregation developed for a change in conference affiliation, because Chappell was separated from the main body of the Iowa-Nebraska Conference to which it belonged. The members felt they could have closer fellowship with the South Central Conference, which had been planting and developing congregations in Colorado. In October 1957 the congregation was received as a member of the South Central Conference. Twenty persons signed as charter members of this "new" congregation which was renamed Chappell Mennonite Church.

The group of Mennonites residing in the Julesburg area, which had begun holding services in the Julesburg Cottage in 1956, determined to have its own place of worship and also wished to retain its membership in the Iowa-Nebraska Conference. As a result, a Sunday school and a new congregation were organized in Julesburg on 8 September 1957.

As a result of the Great Depression and subsequent periodic droughts, many of the Chappell Mennonites had left the farm and moved into town or elsewhere by the 1950s, and the old church building was in need of repairs as a result of hail and dust storms.  In November 1957 the church building was dismantled and the lumber used to build a new church structure in town to enable the congregation, which had a membership of 22 and an average attendance of 35 in 1959, to have a more effective outreach to the community. The congregation met in the town library while the new structure was built, and Fred Alderfer, a man in 1-W service from Denver, conducted bi-weekly services. The new building was dedicated and the congregation's new pastor--Cletus Miller--was installed on 6 November 1960. The Chappell Mennonite Church became a charter member of the Rocky Mountain Mennonite Conference in 1961.

As young people continued to leave the Chappell community to attend college and seek employment, the Chappell congregation slowly declined in numbers to 10-12 persons by the early 1970s. Arthur Roth, pastor of the Julesburg Mennonite Church, led morning worship services while his congregation had Sunday school. In November 1974 the church building was sold to a local mortuary for use as a chapel, and most of the remaining members began attending services at Julesburg Mennonite Church.

Unrau, Harlan D. In Pursuit of Land, Health and Mission:  A History of Mennonites in the Mountain States Region. Printed in Canada by Blitzprint Inc., 2007.

The East Fairview Mennonite Church, Chappell, Nebraska (Mennonite Church), after 1953 called the Chappell Mennonite Church, was founded by families who had previously moved from Holmes County, Ohio, to Seward County, Nebraska. In 1883 Abraham Stutzman, who had in the previous year filed claim to a homestead in that section, settled here together with five other families. Sunday school was held from the beginning. In 1890 a meetinghouse was built six miles (10 km) northeast of Chappell and a church organized. N. C. Roth was ordained to the ministry by Joseph Birky of Tiskilwa, Illinois. The membership in 1954 was 63, about 75 per cent of whom lived either in Chappell or in Julesburg, Colorado, 15 miles (25 km) distant. The ministers in 1954 were John Roth and Fred Gingerich. The congregation was a member of the Iowa-Nebraska Mennonite Conference.

Chappell Mennonite Church (MC), Chappell, Nebraska, listed in the Mennonite Yearbook up to 1953 as East Fairview, constructed a new church in Chappell in 1958-59. In 1958 the members living near Julesburg, Colorado, formed a separate congregation under the Iowa-Nebraska Conference and built a meetinghouse in Julesburg. The Chappell church, with a membership of 20, then joined the South Central Conference. The community was established in 1886, rather than in 1883 as elsewhere stated.