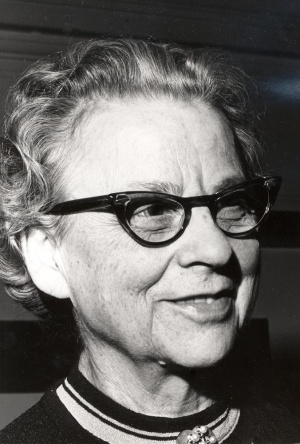 Edna Ruth Byler, born 22 May 1904, was the daughter of Benjamin Miller and Anna May Weaver and grew up near Hesston, Kansas. She attended a one-room school, and a Mennonite church made up mostly of Pennsylvania Dutch people. She graduated from Hesston College in 1923. While at the college, Professor J. N. Byler (d. 14 February 1962) noticed her, and they were married in 1925. He was 30, she was 21. By 1928 they had their first child, Donna Lou. Delmar was born in 1930.

In 1939 they moved to Boulder, Colorado, where J. N. Byler pursued a PhD degree. They returned to Hesston in 1941, then traveled to the East, where Mennonite Central Committee (MCC) administrators asked J. N. Byler to oversee what eventually became relief work in unoccupied France. Edna stayed behind with the two children and became housemother for the unit workers at MCC headquarters in Akron, Pennsylvania. When her husband returned in 1942, the workers were calling her "Mrs. B."

On a trip to Puerto Rico with her husband, Edna saw the needlework of poor women and agreed to market it. With crafts added later, this became the MCC SELFHELP Crafts program (later Ten Thousand Villages). She also operated a gift shop until her death on 6 July 1976.