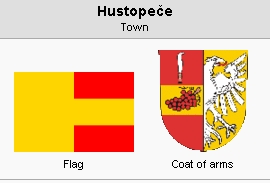 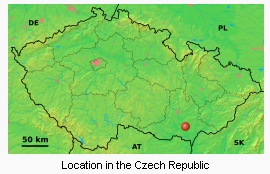 Auspitz (now known by the Czech name Hustopeče and located in the South Moravian Region; coordinates: 48° 56′ 27.05″ N, 16° 44′ 15.44″ E) was the parent congregation of the Hutterian Brethren in Moravia, established about 1529 by Philip Weber. He had settled here with a number of fellow believers, who had shortly before settled in Rossitz. Most of them were Anabaptists from Hesse and the Palatinate, where Weber had been engaged for some time as a missionary.

Early in 1530 a second congregation arose in Auspitz, formed under the leadership of Jörg Zaunring by the Tyrolese who had separated from the congregation at Austerlitz. There were about 150 persons who had been expelled from the brotherhood at Austerlitz. Two preachers from Tyrol, Jakob Hutter and Sigmund Schützinger, were chosen to bring about a reconciliation with the Austerlitz congregation, but their efforts were wrecked by the attitude of the latter whose conduct had been reprehensible. They removed the leader Wilhelm Reublin from his office; he had been convicted of telling the untruth and appropriating church funds to his personal use. Zaunring then was entrusted with the leadership of the church. He was assisted by David Böhem, Burkhard von Ofen and Adam Schlegel, but these were also excommunicated "for unattentiveness." Zaunring was soon afterward banned, for having been too lenient in punishing his wife's adultery.

Since the congregation in Tyrol was now without a shepherd, Jakob Hutter and Sigmund Schützinger were called in again about Easter in 1531. In Zaunring's place Schützinger was chosen to direct the congregation, which was soon united with the older church in Auspitz, which was still led by Philip Weber, and Gabriel Ascherham's church in Rossitz. The two congregations in Auspitz may have numbered about 2,000 adults, that at Rossitz perhaps 1,200 souls. Hutter returned to Tyrol. The three churches were soon augmented by large immigrations of fellow believers from the Tyrol, Silesia, Swabia and the Palatinate.

On 11 August 1533 Jakob Hutter also returned; he found much to criticize in the leadership of the congregations, charged the leaders with negligence, and excommunicated Schützinger. Ascherham and Weber sided with Schützinger. Finally the Tyrolese separated again from the Gabrielites and the Philipites and chose Jakob Hutter as their leader. The members of the other two congregations for the most part returned to their homeland or settled in Poland and Prussia in the persecutions of 1535. Those remaining united with the Hutterites, who had to leave Moravia in 1622 and settled in Hungary.