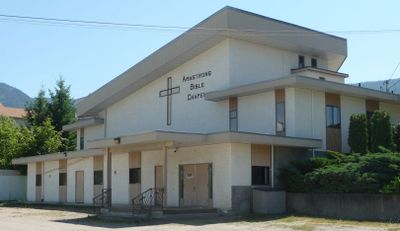 The Armstrong Bible Chapel began in 1976 when Hank and Alice Wiebe purchased a vacant church building. In August of that year, four families began holding Sunday school classes, and shortly after, Sunday morning services. They brought in guest speakers and had local men provide pulpit ministry as well until Jake Balzer was appointed to be their first pastor. The Balzer family began their ministry at the church in August 1977. The church became affiliated with the BC Conference of Mennonite Brethren Churches in June 1979.

Around this time, the Chapel’s sanctuary seated approximately 100 people, but it was not long before church leaders recognized the need for expansion. In spring of 1978, with the help of the British Columbia Conference of Mennonite Brethren Churches, the Chapel purchased additional land and began plans for construction. The new building did not come soon enough. In February of 1980, the original church building was so crowded that the group moved into a local school gym, which was used until construction of the new building was complete. By around 1985, the congregation consisted of 30 family units with Sunday morning attendance ranging from 95 to 110 people.