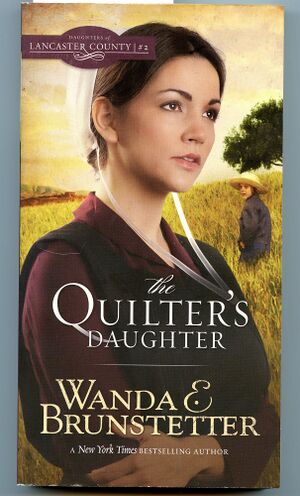 In the category of Christian fiction the Amish Romance Novel is a major genre which gained enormous popularity in most English speaking countries beginning in the early twenty-first century. By 2020 almost 1,000 different works had been published in this genre and they were beginning to find readers in other languages. The German novelist Lydia Preischl has written several original works and Beverly Lewis' popular novels have been translated into over a dozen different languages. Current publishing has also issued these in digitized versions and some have also been reformatted as television and motion picture productions. Many public libraries in the United States of America and Canada have special sections for these popular novels. However, Amish themselves in general do not write nor read these novels.

As with all contemporary popular fiction, Amish romance novels are mass-market paperbacks with brightly illustrated covers. These often feature an Amish clothed maiden dreamily looking over fields or buggies with an occasional young Amish man in the background. They contrast with the lurid covers on other popular fiction.

In America as early as 1905 Helen Reimensnyder Martin wrote the popular locally coloured novel Sabrina: A Story of the Amish (New York, The Century Co.) which contains romantic themes, Amish characters and settings in Lancaster County, Pennsylvania. Then followed occasional romantic stories and novels by other writers featuring the Amish such as: Joseph W. Yoder’s Rosanna of the Amish (Huntington, Pennsylvania, Yoder Publishing Co., 1940). In the 1960s and 1970s the Mennonite author Clara Bernice Miller wrote four romantic novels featuring the Amish and published by Herald Press. They depict Amish youth as having struggles of personal salvation and romance and Amish parents with family troubles. These novels had some local readership and Miller's books published by Herald Press had a mostly Mennonite audience until they were republished by Moody Publishers and gained a wider audience.

Writers of Amish fiction present their stories about an existing culture and religious practices that most readers know little about. However, they are writing fictional stories which are by their nature not true. In general writers of Amish fiction need a good grounding in Amish and Pennsylvania Dutch language and culture to convince literary agents and publishers and many have this in their family backgrounds or have lived near Amish communities. Amish in real life are normal people with many of the social, economic, family and emotional problems we all encounter yet in the novels these are almost all ignored as they depict Amish as an idealistic community. Further, though Amish communities in different location have significant variations in their practices these are almost never noted in the novels.

In the second half of the 20th century Christian publishing and fiction grew because many evangelical Christians, mainly women, sought out fiction to read that was wholesome, ethical, religious, and righteous and lacked the hyper sexuality and hyper modernity of modern American culture. In 1997 the Christian fiction publisher, Bethany House located in Bloomington, Minnesota published Beverly Lewis' novel The Shunning which soon became a best seller. It seems that Lewis who writes very engagingly had found a formula consisting of the technologically limited Amish with rurality, romance and evangelical piety that engaged with Christian evangelicals. This novel is often considered the founding work of 21st century Amish romantic fiction.

Since the mid-twentieth century, Amish have been a draw for tourism in several states in the United States of America and have appeared in film and television giving the general public a view of an alternative and separate society. Many readers and viewers find in Amish romance novels an alternative reality in the nostalgic settings of rural plain Christian life. In these romance novels Amish are viewed as chaste people countering a rather worldly and technologically defiled larger environment and are living in a culture of purity. Most readers, both male and female, find joy in reading these novels for they defiantly want romances with the absence of overt sexuality. Some readers also find the rural settings, an idealized home environment, obedient productive children and the described form of Amish Christian behavior as strengthening their faith even though the Amish themselves in reality often do not dwell on the readers idea and form of born again personal salvation found in modern evangelicalism.

Weaver-Zercher, Valerie. The Thrill of the Chaste: The Allure of Amish Romance Novels. Baltimore, Maryland. The John Hopkins University Press. 2013.