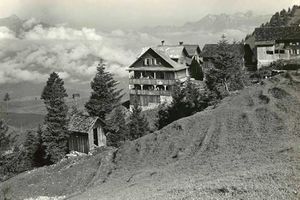 The Alm Bruderhof, Triesenberg, in the principality of Liechtenstein, was the site of a community (Bruderhof) of Bruderhof Communities, a brotherhood founded by Eberhard Arnold in Sannerz in 1920. It was settled in March 1934 as a result of restrictions imposed by the Nazi government in Germany, which made it necessary to move the education and publication activities of the Rhön Bruderhof out of Germany into another country. In March 1935, when a military draft was imposed in Germany, the Rhön Bruderhof's young men fled to Liechtenstein to avoid prison or death. The school children of the Rhön Bruderhof were cared for in the resort hotel of Silum (elevation 5,000 feet), and some neighboring Alpine huts; buildings and land were leased. In addition to the school, a bindery and a turner's workshop were set up, and in the course of time more land was rented in the Rhine Valley to provide food for the growing colony. The publishing house (Buchverlag des Almbruderhofes) published the books of the Eberhard-Arnold-Verlag, and in 1934 Innenland, Ein Wegweiser in die Seele der Bibel und in den Kampf um die Wirklichkeit by Eberhard Arnold.

The Alm Bruderhof was organized in accordance with Hutterite tradition, and in connection with the sale of books, writings, and the products of its workshops carried on an intensive propaganda in the adjacent parts of Switzerland. Active connections were also maintained with England; beginning in 1934 an increasing number of English converts joined the brotherhood. The relationship of the Alm Bruderhof with the mother colony was close and intimate. In 1935, as the Bruderhof increased through the influx of military-aged men, the political community of Triesenberg raised a protest. The objections subsided when the Brethren presented their side of the matter in addresses and articles in the public press, although the government limited the colony to a membership of eighty, inclusive of the children.

During a journey to Holland, England and Scotland, Eberhard Arnold won the practical support of friends of the Bruderhof. In 1934 and 1935 the Bruderhof maintained a small station in Zürich, the cradle of Anabaptism, which served as a training station for some young members, for the sale of their products and as a missionary outpost. In 1936, when military duty was extended to include Germans living in foreign countries, the brotherhood was compelled to look for a new home for these brethren and their families, since the Liechtenstein government could not give them the right of asylum. Thus it came about that the Cotswold Bruderhof was founded in England in 1936.

The Alm Bruderhof experienced another increase a year later, when the Rhön Bruderhof was dissolved and some of its members found a reception there. In the summer of 1937 the Hutterite elders, David Hofer of Manitoba and Michael Waldner of South Dakota, visited the Bruderhof, and from there traveled throughTyrol, Moravia and Slovakia, visiting the sites of early Hutterite history. In 1938, when Austria fell under the power of Germany, the members of the Alm Bruderhof moved into the Cotswold Bruderhof.