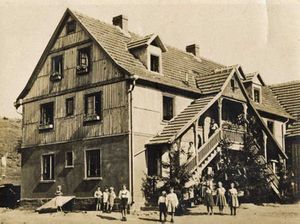 The Rhön Bruderhof (Bruderhof Neuhof, Fulda district, Germany), was founded in the foothills of the Rhön Mountains of Germany in 1926 by the Sannerz brotherhood and existed until 1937. The contract of its founding, dated 5 December 1926, which was the expression of "the fundamental common expression of the direction of the will and the work for all time," says: "The publications of the Eberhard Arnold-Verlag and the work of lecturing connected with it shall be continued in the spirit of the hitherto published books, writings, and periodicals; likewise the daughter congregation in the spirit of the Sannerz letters and the Wegwarte. Above all the open door and the community of life and goods of the early Christian church are to be kept open and carried on. . . . The contracting parties on the occasion of the hereby established founding of the Bruderhof express their unanimous will that this agreement shall remain unconditionally and without a break directive also for all successors of both parties." The name Bruderhof was adopted from the older Hutterite terminology.

To the original small peasant farm Hansahof two additional adjacent farms were added, thus giving the Rhön Bruderhof about 250 Prussian Morgen of fields, meadows, pastures, and woods. By 1934 a small communal settlement had been erected by new buildings and remodeling of old ones, which offered simple subsistence to about 140 persons. From this colony Eberhard Arnold set out to visit the Hutterite settlements in the United States and Canada in 1930-31. Through the union established at that time with the American Hutterites, the Bruderhof's inner and outer structure was continued under the deep impact of the four-hundred-year-old history of the communal life of the Hutterites. The elder (Wortführer) was supported by one or two assistant preachers (Diener am Wort). Together they bore the responsibility for all the internal and practical affairs, assisted by the householder in business matters, the work supervisor (Weinzedel) for the systematic distribution of labor, the treasurer (Kästner) for provisions, and the housemother for feminine concerns. Several additional brethren (Zeugnisbrüder) were called on for support in making important spiritual decisions; each field of work was supervised by a member of the brotherhood. But the final authority in all inner and outer matters lay, as in all Hutterite communities, in the Spirit-led, united brotherhood as the bearer of the reality of the church.

The divisions of work included agriculture with the gardens, the community school with the children's home for foster children, the publishing house with its printing and distribution of books, the office, the various workshops for trades and building; in addition there were the various household activities. The infants were cared for in the nursery. At the age of two or three years they were placed in the kindergarten until they were of school age. Young people were educated according to their gifts and abilities. In the children's home orphans and children from difficult social circumstances were taken in and educated with the children of the commune. In the publishing house and the printshop, which was instituted in 1931, the work begun in Sannerz was continued, especial attention being given to research, collection and publication of the old Hutterite writings. In 1932 the printing of the Klein Geschichtbuch by Johannes Waldner was begun, and in that year as well as in the next an epistle was issued to the Hutterian Brethren of North America. With the Nazi rise to power in 1933, the death of Eberhard Arnold in 1935, and other difficulties, the work on the old manuscripts was seriously hindered, and the printing of the Klein Geschichtbuch could not be completed. Besides the education of the children and public witness in spoken and written word, the preaching of the Word among the brethren and the numerous guests and assistants on the Bruderhof was the most important work of the missionary community on the Rhön Bruderhof, so that the brotherhood grew from a membership of 40 in 1927 to 130 in 1934 through the influx of persons from Germany and other countries.

In spite of the difficulties evoked by the Nazi government, the Bruderhof attempted to continue its work in the same spirit as before. But in November 1933, the Gestapo instituted a search of the buildings, closed the school and the children's home, and forbade hospitality to guests on the Bruderhof. Since the distribution of literature in Germany was also restricted, a daughter colony was founded early in 1934 in the principality of Liechtenstein. The school, children's home, and publishing house were transferred to the Alm Bruderhof there. In consequence of the emigration of a part of the Bruderhof and the departure of a number more when military training became obligatory in Germany in 1935, the Rhön Bruderhof was seriously weakened. By such measures as heavy taxation, foreclosure of mortgages, and other economic regulations the state tried to compel the Bruderhof to close; but with the assistance of the Alm Bruderhof and the Cotswold Bruderhof, the Rhön Bruderhof was able to maintain itself until it was forcibly closed by the Gestapo. Eberhard Arnold died on 22 November 1935, in the midst of this severe struggle. His Innenland, revised in 1932, was published soon after his death, as well as the booklet, Eberhard Arnold, Sein Leben für die Bruderhöfe. At the end of 1936 the Cotswold Bruderhof in England took over the printshop and the extensive library. In April 1937 two American Hutterite elders, David Hofer of James Valley, Manitoba, and Michael Waldner of Bon Homme, South Dakota, visited the Bruderhof and were witnesses of its dissolution on 14 April 1937, the arrest of the three directing members of the corporation, the confiscation of endowments, and the expulsion of the members from the grounds. Through negotiations the expelled group succeeded in obtaining permission to immigrate to Liechtenstein and Holland. David Hofer gives an account of these events in Der Pflug (Vol. I, no. 3) and The Plough (Vol. I, no. 3) in the form of pages from his diary, titled "Die Auflösung des Rhönbruderhofes in Deutschland." A few of the exiles were admitted to the Alm Bruderhof; most of them enjoyed the hospitality of the Dutch Mennonites in Bilthoven and Elspeet for two months, until they could proceed to England and enter the Cotswold Bruderhof. After three months the three imprisoned brethren were released and permitted to join their families in England.

The Rhön Bruderhof was sold at auction by the authorities. In Liechtenstein and in England the brotherhood was able to live according to its faith, until it was compelled by reasons of war to immigrate to Paraguay. Three Bruderhofs were established in Primavera, Paraguay, whereas in England the communal life was revived in 1942 in the Wheathill Bruderhof. In all four of these settlements the work was carried on in the spirit of the contract of founding as a work of re-establishment of the primitive Christian and primitive Anabaptist church. Later a Bruderhof was established at Woodcrest, Refton, New York.

Baum, Markus. Against the Wind: Eberhard Arnold and the Bruderhof. Farmington, PA: The Plough Publishing House 1998.