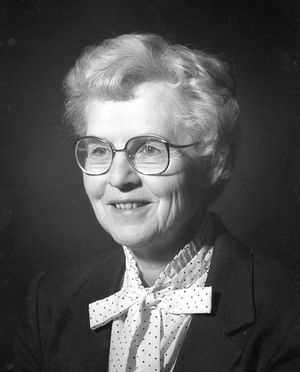 Author, biographer, editor, columnist, and essayist, Katie Funk Wiebe was also known as a speaker, preacher, pioneer, prophet, feminist, teacher, mentor, and historian. In 2000, The Mennonite named her among the top 20 Mennonites with “the most powerful influence on life and belief of the…Mennonite Church in the 20th century.”

Katie Funk was born 15 September 1924, in Laird, Saskatchewan, Canada to Jacob Funk (11 July 1896-7 May 1986) and Anna (Janzen) Funk (11 March 1895-5 March 1994). They were Mennonite immigrants from Ukraine. The fourth child and third daughter in a family of five children, Katie grew up in Blaine Lake, Saskatchewan, where her father managed the local grocery store.

While Katie called herself a Christian, she reflected later that she wasn’t really a disciple until she had a profound encounter with God at the age of 19 just before she left for Winnipeg to attend Mennonite Brethren Bible College (MBBC). When Katie began working for a student publication, she met its new editor, Walter Wiebe (3 October 1918-17 November 1962), a student from Yarrow, British Columbia. They were married on 21 August 1947 in the Saskatoon Mennonite Brethren Church.

Following college, they moved to Hepburn, Saskatchewan, where Walter took a teaching position at Bethany Bible Institute. Their shared dream of a literature ministry found expression when Walter began editing the Youth Worker. However, due to his busy schedule, Katie took on more of the editing work to the point where she was producing the entire publication under Walter’s name. Katie was invited to write a column, “Women and the Church,” for the Christian Leader, which she began in January 1962.

In September 1962, Walter and Katie moved to Hillsboro, Kansas, with great anticipation of seeing their vision for a literature ministry finally becoming a reality. A few weeks later, a tumor was discovered growing rapidly in Walter’s abdomen and he died at the age of 44, leaving Katie a widow in a foreign country facing the prospect of raising her four children alone. While plagued with questions, Katie realized that God had been slowly developing in her a sense of trust, “not as a strong blinding light, but as a glimmer of hope in the gathering darkness.”

In hindsight, Katie recognized that Walter’s death was the one experience that had the most far-reaching effect—widowhood “changed the road signs” and sent her down a new path. Katie experienced a profound loss of identity and she began to re-examine her role as a woman in the church. She recognized the “vast reservoir of untapped potential” of women and began to call on the church to stop responding to women who challenged traditional patterns of ministry with “a gentle patting into submissiveness back to the kitchen and the sewing circle.” Katie felt strongly that defining “women’s roles only in terms of limitations, rather than opportunities, was wrong.”

Katie took on copy-editing and proofreading jobs to support her growing family. In 1966, she began teaching English at Tabor College in Hillsboro, taking classes to finish BA (Tabor College, 1968) and MA (Wichita State, 1971) degrees in English. She taught at Tabor College until her retirement in 1990.

During the 1960s, Katie was virtually the only voice seeking to prod Mennonite Brethren to address the implications of the changing status of women for life in the church. She often felt that “writing about the issue was a monologue, not a discussion.” While Katie was involved in the initial attempts by North American evangelicals to address the question of women’s roles during the 1970s, it wasn’t until 1986 that Katie officially became involved in the Mennonite Brethren conversation when she was invited to be part of a task force that drafted the first resolution prepared by both men and women.

In 1976, Katie wrote Alone: A Widow’s Search for Joy, which told the story of her husband’s death and her experience as a widow. Readers resonated with Katie’s vulnerability reflected in her unique autobiographical approach to storytelling. Katie maintained, “I cherish the opportunity to share my stumbling through life with others. After I have lived it, why hang on to it?” In 1988, Katie wrote Bless Me Too, My Father, which featured her reflections about change, particularly theological change, during middle adulthood.

With retirement, Katie’s attention turned toward another group of people who were often undervalued in the church—older adults. Through writing, speaking, and educational programs, Katie sought to create awareness within the church of the needs of older adults as well as the value of their contributions. Katie wrestled with her own experience of aging in Border Crossing: A Spiritual Journey (1995) and shared the difficulties and joys of her life journey in You Never Gave Me a Name: One Mennonite Woman’s Story (2009).

At the heart of Katie’s writing was her passion for what the church could be. Katie wrote from within the church, giving voice to those who were marginalized: women, younger adults, lay people, widows, and older adults. Even though Katie lived and worked among the Mennonite Brethren all her life, her own journey among them has been a crucible for addressing the critical issues facing the wider church.

Katie started writing in her late 30s, publishing over 2000 articles, columns, and book reviews, not to mention over 20 books. She openly shared her life and by doing so invited others to recognize themselves in her story. Perhaps Katie’s greatest gift to the church is “wrapping words around thoughts readers were struggling to articulate.” Her courage to express the ideas and questions of an ordinary woman continues to challenge men and women to faithful discipleship in the midst of life’s struggles.

Katie Funk Wiebe died 23 October 2016, in Wichita, Kansas, leaving a legacy of faith, storytelling, and an invitation to live by choice, not by default. Katie and Walter are buried in the Gnadenau Mennonite Cemetery, Hillsboro, Kansas.