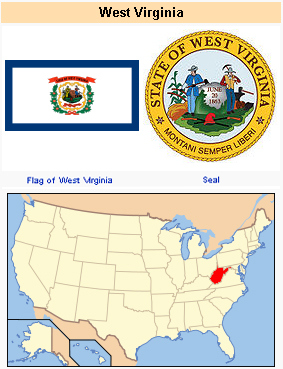 West Virginia is a state in the Appalachian region of the United States of America, bordered by Virginia on the southeast, Kentucky on the southwest, Ohio on the northwest, and Pennsylvania and Maryland on the northeast. The total area of the state is 24,230 square miles (62,755 km²) and the estimated population in 2007 was 1,812,035. In 2005, 96.01% of the population was Caucasian and 3.49% was African American. In 2001 religious affiliation was stated to be as follows: Baptist (30%); Methodist (15%); Other Protestant/General Protestant (15%); Non-denominational Christian (7%); Roman Catholic (8%); Not religious (13%); and a non-Christian religion (4%).

The territory of this state, located west of Virginia was a part of Virginia until 20 April 1863. On that date, West Virginia was declared a separate state by President Lincoln. This action was the result of the refusal of the northwestern counties of Virginia to accept the secession from the union decreed by the majority of the counties. 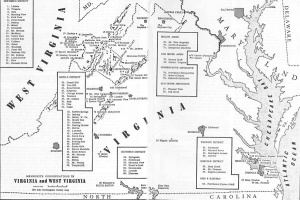 A few Mennonite Church (MC) families settled within the bounds of West Virginia near the close of the 18th century. These early settlements were made in Greenbrier and Rockbridge counties. Since the formation of the new state in 1863 the witness of the Shenandoah Valley Mennonite churches has been effectually brought to the people of Pendleton, Randolph, Tucker, and Hardy counties of West Virginia, which are over the mountains just across the Virginia border. In these areas there were in 1957 a total of 21 congregations, missions, or preaching points, with a total of 533 baptized members. The oldest of these was Salem at Needmore, started in 1868, with 113 members in 1957. These congregations were all Virginia Conference and were served by the bishops of two of the Shenandoah Valley districts. -- Harry A. Brunk

Mennonites in the Appalachian regions of West Virginia have promoted craft production, a medical clinic at Harman, a campground (Harman Mountain Farm), and, for a time, a Discipleship Center (also at Harman), sponsored by Mennonite Board of Missions (Mennonite Church).