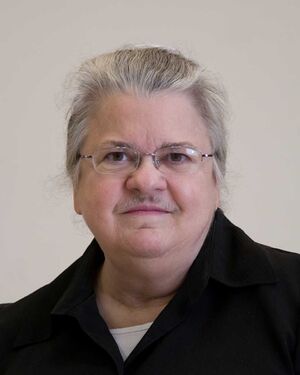 Carolyn Landis Charles: historian, archivist, editor, and historical society administrator, was born 27 December 1943 in East Petersburg, Pennsylvania, USA to Hiram M. Charles (9 May 1910-15 February 1997) and Anna Landis Charles (11 July 1915-6 July 1994). She was the oldest surviving child in a family of three daughters and one son; an older sister died at birth. Her father was a businessman in Lancaster, and Carolyn grew up in East Petersburg, a small borough northwest of Lancaster City. On 2 June 1979 she married Robert C. Wenger (7 September 1915-3 October 2008); they had no children. Carolyn Charles Wenger died 27 April 2020 at Fairmount Homes, Ephrata, Pennsylvania. Carolyn and Robert Wenger are buried in the Cedar Hill Cemetery in Ephrata, Pennsylvania.

The Charles family attended the East Petersburg Mennonite Church, where Carolyn remained a member throughout her life. She graduated from Hempfield High School in Landisville, Pennsylvania in 1961, followed by an English degree from Eastern Mennonite College in Harrisonburg, Virginia in 1965. She taught English at Lancaster Mennonite High School from 1965-1967 and in 1968-1969. During this time she also completed a MA in English (1968) at the University of Pennsylvania and began working part-time at the Lancaster Mennonite Historical Society (LMHS). Initially, the LMHS employment served to supplement Carolyn's income and allowed her to work with the librarian, Rhoda Kennel. The enthusiasm of the then director, Ira D. Landis engaged an interest in Mennonite history for Carolyn that had been dormant.

By the early 1970s Carolyn Charles had become the primary energy and imagination behind Mennonite Historical Associates, an early program of the LMHS, planning field trips, seminars, an annual art competition, and a host of other activities. She became the executive director of the society in 1976 and served in that role until 2001. In 1978 she launched Pennsylvania Mennonite Heritage, an illustrated quarterly she edited until 1987, and again from late 2003 to 2012. Carolyn Charles Wenger was a consummate editor, attuned to detail and the bigger picture. She gave countless hours to editing and proofreading The Earth is the Lord's, a history of Lancaster Mennonites by John L. Ruth.

During Carolyn Wenger's time as its executive director, the Lancaster Mennonite Historical Society grew into the largest grassroots Mennonite history organization in North America, with several thousand members. She professionalized the preservation of collections but also worked vigorously to communicate the Anabaptist values represented in those collections.

After her retirement, Wenger continued to volunteer at LMHS, often at a nearly fulltime level, until shortly before her death. Her influence extended far beyond Lancaster. She was a member of the Historical Committee of the Mennonite Church from 1973-1981 and again from 1989-2000. She served on the editorial council for the four-volume Mennonite Experience in America series, and was a consulting editor for the Mennonite Quarterly Review. She also contributed her skills to organizations like the Pennsylvania German Society, The Eastern Mennonite Associated Libraries and Archives, and the Allegheny Mennonite Historical Association as well as local historical societies.

Skilled in reading German script, Carolyn Wenger transcribed and translated documents for myriad research projects, her own and those of others.

Carolyn Wenger once observed that "the stabilizing knowledge of historical events" provides the Christian "with deeper perceptions of the reasons for and meaning behind change," which in turn allows one to live into the future "with greater flexibility and patience." Carolyn Charles Wenger exemplified this dynamic with considerable grace.