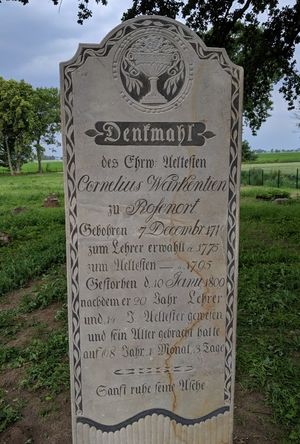 Warkentin was one of the most outstanding men of his time in the West Prussian brotherhood, and played a significant role in the organization and establishment of the Chortitza Mennonite Church in Russia. He and Cornelius Regier, elder of the Heubuden Mennonite Church, made a trip to Chortitza in 1794 upon invitation of the congregation to settle a difficulty which had arisen during the early years and because of the death of the elder, Behrendt Penner. The two worked with great success, but before the task was accomplished Cornelius Regier died after ordaining Cornelius Warkentin to the office of elder (Warkentin was formally ordained by his congregation back in West Prussia in 1795). Warkentin continued the work and returned to his church, stopping on the way at various places. He received from the Tsar a gold medal accompanied by a letter dated 1804, in recognition of the service he had rendered to the Mennonites. Warkentin's account of the trip was published in the Mennonitische Rundschau (No. 4, 1897) and by P. M. Friesen (134). He and Regier did much to help the settlers to overcome their early difficulties. He kept a detailed diary of the trip, which has been preserved. Friesen describes the man and his work in Russia as follows (p. 47):

He was an impressive and heart-winning personality. . . . He writes, speaks, functions in office, and acts before the high or the lowly like a man with a good general theological training. The Mennonites as well as the Lutheran and Catholic clergy, imperial Russian colonial officials, governors, and highly placed persons treat him with honor and affection. His visit to the Chortitza Mennonite settlement is a continuous Pentecost for the orphaned settlers, his departure a heartbreaking grief.