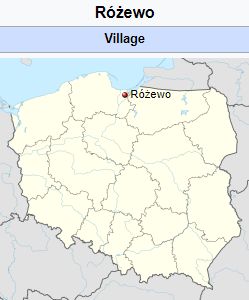 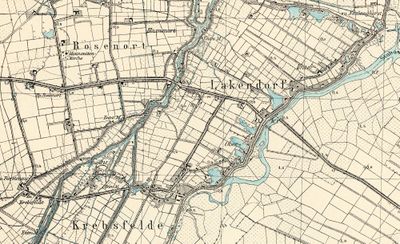 The Rosenort Mennonite Church in Rosenort, Gross Werder, Prussia, was originally a part of the Gross-Werder congregation. At first the congregation, belonging to the Flemish wing, was served in communion and baptism by the elders of the Danzig church. After 1639 they chose elders of their own. The first elder was Hans Siemens (died 1644), chosen on 22 September 1639.

Until the middle of the 18th century the Dutch language was used in the religious services. Their meetings had to be held in their homes, granaries, barns, and sheds. On anniversaries and festive occasions there were sometimes 1,000 persons at a meeting, as in July 1741, when 51 persons were baptized. Not until 1754 did the congregation receive permission to build a church in Rosenort. The first communion service in the new church, held on 2 March 1755, was observed by 1,566 members. By 1787 the congregation had grown to a membership of 1,836. They were almost exclusively farmers, but in 1774 they together owned only 129 Hufen and twelve Morgen of land, or a little more than two Morgen per person.

In order to improve their condition they sent two members to Berlin in 1787, Cornelius Warkentin and Elder Donner, to negotiate with the government concerning their old charter and also to get permission to acquire more land. During their ten weeks in Berlin they found little understanding. Therefore, many families of the West Prussian Mennonites accepted the invitation of Catherine the Great to settle in Russia. The first train of emigrants, 152 families with 919 persons, including 41 families of the Rosenort congregation, gathered on 28 July 1788, for a great farewell service in the Rosenort church. The Mennonite immigration to Russia continued for 50 years and took all the overflow of the West Prussian congregations to the still uncultivated steppes of South Russia. How difficult it was for the Mennonites to take up the wanderer's staff is made clear in a petition presented by the Rosenort congregation in 1791, which asks: "Do the king's most loyal subjects not need to fear to leave the land into which we did not push ourselves, but into which our forefathers were invited more than two hundred years ago, the land which our forefathers for the most part made arable?" (Regehr, 6). The name Rosenort was repeated in their new homelands, as in the Molotschna, Saskatchewan, Manitoba, in Mexico, and in Paraguay.

On 19 January 1812, the church in Rosenort burned down, but was rebuilt and put into service on 20 November 1814. It seated 600. In the fire the church records kept from 1 November 1772 to 1809 were destroyed. Later the records of 1840-55 was lost in a flood. All that remained were the notes of 1810-40 and the records begun in 1857. After 1754 the cemetery around the Rosenort church belonged to Rosenort and after 1883 another was acquired in Zeyersvorderkampen, both of which had a funeral hall. Several times the Rosenort congregation suffered severe damage by floods, for example, in 1681, 1848, and 1888.

In the last years before the collapse of 1945 the congregation was served by an elder and five preachers, and in 1942 had a membership of 514 besides 291 children, living in 32 villages. The congregation was a member of the Conference of the East German (West Prussian) Mennonite congregations and also of the Vereinigung.

On 24 January 1945, the area between the Vistula and the Nogat was evacuated before the oncoming masses of Russians. Four hundred years of history of the settlement and over three hundred years of congregational history found its close on these days. Of the 800 souls in the Rosenort congregation in 1939 not even 150 announced their arrival in the western zones of Germany and in Denmark in 1947. Many fell in the struggles lasting many years, many froze to death on the flight over snow-covered roads or in the floods of the Baltic Sea, many died of starvation or were killed at home, many lost their lives on the road to Siberia or in hopeless imprisonment.

Elders of the Rosenort Mennonite Church